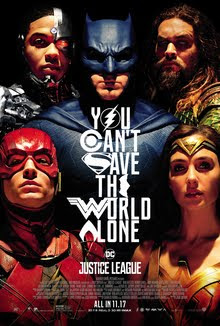 Here's the weird thing about the DC Universe that's starting to bother me: individually, they seem to get characters that I want to see more of. Unfortunately, they haven't manage to stick all those interesting characters in a movie that works really really well just yet and Justice League is no exception.

As with it's predecessor, there's plenty of interesting characters to enjoy here. Ben Affleck remains intriguing as Batman. Gal Gadot is wonderful as Wonder Woman. Jason Momoa reinvents Aquaman and makes him a a bad ass for the 21st Century. Ezra Miller brings an entirely different take on The Flash to the big screen, but proves no less charming than his televisual counterpart, Grant Gustin. If there's a 'weak link' in the ensemble, it might be Cyborg- but even there, I think the lack of backstory his character is given is more due to time constraints than anything else. Ray Fisher's performance still hooked me and left me wanting to learn more about the character and his story.

The plot device that brings them all together? Steppenwolf and his quest for the three 'mother boxes' which, thousands of years ago he used to try and conquer Earth. A combined army of the Olympian Gods, the Amazons, Atlanteans, humans and a Green Lantern defeated him and split up the boxes to hide them. If combined, the boxes for 'The Unity', the power of which will destroy the ecology of Earth and terraform into a new home for Steppenwolf.

With Superman out of the picture thanks to the last movie, Steppenwolf returns to make his next attempt and conquering all of humanity. He gets one Mother Box from Themyscira, which prompts Queen Hippolya to warn Diana of his return. Then he heads to Atlantis and steals theirs. Batman, seeing the odds increasingly against them proposes uses the final Mother Box to resurrect Superman, which they do- and he even brings along a back up plan in the form of Lois Lane just in case Superman isn't all that happy to see them- and spoiler alert, he's not that happy to see them. He flies off to get his memories back, while Wonder Woman, Batman, Cyborg, The Flash and Aquaman head to rush to take on Steppenwolf.

They do so and Superman arrives at the last minute and helps them to separate the Mother Boxes. Steppenwolf, suddenly scared is consumed by his Parademons before they all teleport away. After the dust settles from the battle, Bruce and Diana set up a base of operations for the team with plenty of room for more members. Arthur heads back to Atlantis. Barry gets a job at the Central City Police Department, Superman goes back to being Clark Kent and reporting.

There's really not much more to the movie than that...  the characters are interesting enough that you want to see movies about them, they just haven't quite figured out how to put them altogether on screen- and that's partially because Marvel did it differently- Marvel built up to the Avengers and introduced characters in their own movies. DC, weirdly, seems to be doing it in reverse, in what seems like a strange attempt to short cut their way to Avengers like box office numbers, but I'm not sure it's going to work. Sure, I think they can probably bring back Batman, keeping going with Wonder Woman, Aquaman and The Flash- but at some point, you're going to have to bring them all back together again  and for that, you'll probably need a better movie than this.

Overall: The characters are compelling and interesting and leave you wanting more. The plot is 'meh' and the villain and stokes are supposed to be well nigh apocalyptic and yet don't feel that way. My Grade: ** 1/2 out of ****