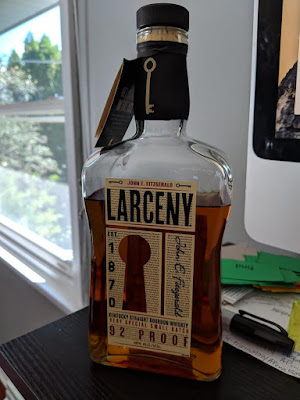 One of the nice things about turning 35 is that I (usually) get at least one new bottle of whiskey to dig into and this year- I got two! So I figured I might as well start with the bourbon before moving onto the Irish surprise next month- which brings us to Larceny Kentucky Straight Bourbon. A small batch bourbon from Louisville, this one raises the eyebrow immediately because it's a wheated bourbon- they use wheat in the secondary grain instead of the more conventional rye- which might explain the color on this one a bit- it's more of a deep rich brown than you normally see in bourbons. (I mean, I drink a lot of bourbon, but I don't know if I've reached the magical 10K hours mark or anything yet, but in my experience, the darker colored ones usually have hints of red more than brown.)

Officially, it's John E. Fitzgerald Larceny Kentucky Straight Bourbon and it's got a pretty nice looking website and a good story to boot: Mr. Fitzgerald was a bonded Treasury Agent and back in the days of Prohibition, they were the only ones allowed to have keys to the barrel storage rickhouses. Mr. Fitzgerald was a fan of bourbon and liked to get ahold of the best barrels and those became known as 'Fitzgerald Barrels' around the distillery. He was eventually immortalized by no less than the man himself, Pappy Van Winkle who named a brand, Old Fitzgerald after him. Larceny is a call back to the man's superb taste and the legacy of that brand.

I might come back to this one... I like to do my tastings as blind as possible to avoid confirmation bias problems, but when I look at the amount of awards this has one and the tasting notes from Master of Malt don't look anything like mine it makes me wonder. This might qualify as a 'Boozehound Revisited' in a few months, I'll have to see how I feel about it, because overall, it was just okay. It wasn't awful but it didn't knock my socks off either.  Here's my take on it:

Color: dark amber, but moving toward shades of rich brown instead of red or gold.

Nose: It's strong. You get the alcohol tickling your nose hairs a bit. Crisp, I want to say orchard fruits but it feels like a hint of apples and like sultanas? Honey?

Body: It's nicely balanced with good viscosity, but it's kind of 'meh.'

Finish: Little too strong here. It comes at you in a rush and almost feels like heart burn going down. Not a pleasant warming sensation at all.

Overall: Solid, but somewhat uninspired. (Weird addendum: this actually was much more pleasant on the rocks and once you warmed it up a bit in your hand. I think this one is more of a 'rocks' bourbon to me and I think I'll probably treat it as such going forward.) My Grade ** 1/2 out of ****