This Week In Vexillology #261

July 07, 2018
We're back! After a much-needed hiatus in June, it's time to hit the ground running with our usual 4th of July Special. As you're reading this, we should be either in the Medium White North or passing through it's neighbor to the southwest, South Dakota. (I don't think we've locked in our final itinerary yet, but we're close. It may or may not include a stop in Sioux Falls.) I did some checking of the archives and it turns out that in the distant past, I knocked off Minnesota in another 4th of July Special, so I can't really do that. (Though adding a flag of Minnesota and a bottle of good Minnesota whiskey are on my wish list for vacation.)

But, let's get to South Dakota: 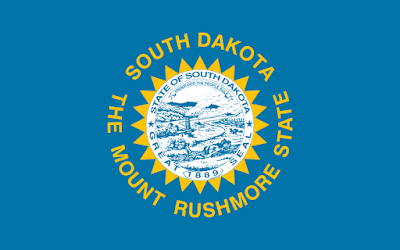 Right off the bat: Sigh. Another Seal On A Bedsheet. Someday, states are going to start getting better about their flag designs and hopefully we'll see a reversal of this trend, but I'll give South Dakota this: it's not a boring Seal On A Bedsheet. The color is unusual enough that it stands out and the sunburst around the seal makes it interesting to look at. As a Seal On A Bedsheet goes, it's a step above the rest.

The current configuration of the flag was adopted in 1992, which makes it relatively new as state flags go. Before 1992, the inscription below the seal read 'The Sunshine State' and before 1963, the seal was actually a full on sun. But, I guess South Dakota realized that Kansas was 'The Sunshine State' and wanted to stand out a little more and while many states have sunshine, there's only one state with Mount Rushmore.

The seal is a little hard to see, but it's got a pretty comprehensive wiki-page. The outer ring has 'State of South Dakota' written at the top and 'Great 1889 Seal' written at the bottom. It was actually designed when the state was still a territory in 1885 and then adopted when it became a state in 1889. The inner circle has the state motto 'Under God The People Rule' (which is actually kind of a cool motto, the more I think about it.) And a picture that features hills, a river with a boat, a farmer, mine and cattle, which are meant to stand for the commerce, agriculture, industry and natural resources in the state.

(There was a proposal in 2012 to change the flag, but it fell short. The pitch and design are found here and I would be all about it if South Dakota went with this design. It looks pretty cool.)

And that's South Dakota! Remember, until next time keep your flags flying, FREAK or otherwise!