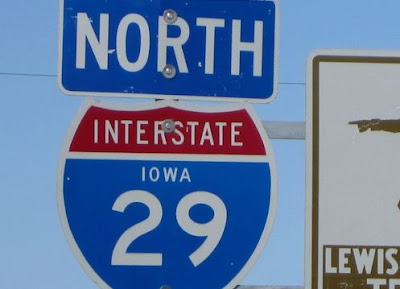 When I drive, I tend to get really quiet and sort of lose myself in the landscape around me for long periods of time. It drives The Missus (and a few other people down the years who have driven with me) a little nuts, because I don't really talk. I mean, I can talk and I do talk, because being silent is boring and sort of impolite when you've got someone sitting next to you, but my default state when I'm driving is usually silence, because I'm just taking it all in.

Roads and driving long distances have been a part of my summer routine ever since I was a kid. We'd be rousted out of bed at about 3 AM and my mother would take the first leg of the driving, taking us across Iowa in the pre-dawn darkness until we would arrive in Omaha where we'd stop for breakfast. I have vivid memories of the road: catching sight of the Rocky Mountains for the first time, coming through the mountains at night and seeing the lights of Salt Lake City, Las Vegas and San Francisco emerging out of nowhere, coming over the crest of that hill near Burnsville and seeing the Twin Cities across the wide open valley in the distance.

For all that people complain about car culture, it's still the easiest way to see this amazing country of ours.

Vacation this year was a modest, if hectic affair. The baby is still too little to go anywhere a long way a way and we went to Omaha to pick up  my nieces to bring them along for the ride. We went over to Des Moines and up I-35 to Minneapolis for the first leg of our journey, but out return journey took us through Worthington and down to Sioux City and then back down to Omaha on I-29.

That particular route I had traveled once before, but going the other way. I left from a family Easter gathering in Omaha to go north to Mankato to turn in my thesis and get my master's degree over the finish line. I-29 was dead and empty and so I drove faster than I should and promptly got a speeding ticket just south of Sioux City. Going the other way was more of a leisurely affair.

I-29, though: it's 750 miles and runs from the Canadian border all the way down through the eastern edge of the Dakotas and the western edge of Iowa and Missouri to Kansas City. There was a campaign by residents of the states further south of Kansas City (Missouri, Arkansas and Louisiana) wanted to extended it further south to New Orleans and portions of that were completed- but make up Interstate 49 instead. Interestingly, the Fargo to Canada chunk of the freeway was originally designated as Interstate 31. No freeway was planned south of there, but eventually, they connected I-29 from Sioux Falls to Fargo and just named the whole damn thing Interstate 29. (If you're into minor bits of historical detail: I-29 runs through the Platte Purchase in Missouri, which wasn't originally part of Missouri.)

The first portion of the drive wasn't on I-29 though. We followed Highway 60 south from Worthington and across the border. Past Sibley (which didn't smell that bad, actually) and Hawkeye Point (which I was always strangely obsessed with as a kid- I'd always love finding the highest point marker for each state in our Rand McNally atlas and I'd never thought I'd have any reason to go near Hawkeye Point- until I met the Missus who lived maybe five miles away from it.) and through Sheldon and Alton until it's terminus at LeMars.

We had a pit stop at LeMars for ice cream (because it's kind of obligatory, really) and then continued south of Highway 75, which swung around Sioux City through rolling green hills that reminded me a lot of the way we approached San Francisco* before connecting with I-29.

I don't know enough about the topography of the place to say for sure, but if I had to guess, the relative isolation of the interstate is probably due to it's proximity to the Missouri River. Looking on the map, 29 to the east and Highway 75 to the west seem to former boundaries for an insanely wide flood plain and there's not a lot of habitation in between them. The further south you get, the emptier it feels and off the the east you see the long line of the Loess Hills that creep closer and then get further away and then come very close indeed before retreating somewhat to the east again.

I can't remember where exactly you can first catch sight of downtown Omaha. I want to say it was somewhere around Missouri Valley, but it may have been closer to Loveland or even Honey Creek, but it was insanely far away, a lonely glimpse of a far distant tower. It was very close to the river at this point, so the land was flat, farm fields and rivers that were carefully bordered by high, engineered banks, presumably to contain them.

There was also this clump of trees that were completely bare of any branches or greenery, almost as if they were in a swamp or just dying slowly. You could imagine people working and living their whole lives in those fields, toiling in the shadow of that faraway glimpse of the towers of the city far away. (It's the kind of post-apocalyptic spark that sort of embeds in my mind and invariably finds it's way into my writing.)

Approaching Omaha from the north was strangely beautiful and remarkably easy to accomplish- though that might be down to it being a Sunday rather than any other day of the week. Soon enough, it was over with though. I cut over on I-480 through downtown Omaha to meet up with Interstate 80 out on the other side and soon enough, we had reached our destination.

*I have this memory of driving through these hills covered in golden grass and wondering where the hell the city was, because we were getting closer and closer and closer and there was no sign or indication of a city anywhere. We just drove over a hill and it was kind of... there. Vegas is much the same way, depending on how you approach. There's just miles and miles of desert and then, suddenly... Vegas.