Bookshot #109: The Left Hand of Darkness 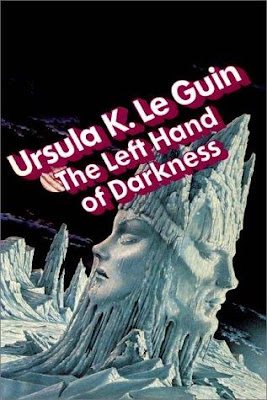 The Left Hand of Darkness had long been sitting on my bookshelf, part of the long list of books that I was planning to read at some point, but the passing of it's author Ursula K. LeGuin in January finally gave me the motivation to pick it up and actually read it. By all accounts LeGuin was one of the icons of science fiction and it was high time I read at least one of her books. And what a book to read... I don't want to say that it delivered on the hype, because 'hype' strikes me as the wrong word to describe one of the classics of the genre. But after finishing this book, I'd put it right up next to Dune, The Martian Chronicles and The Moon Is A Harsh Mistress as a 'must-read' of science fiction.

Set on the icy world of Gethen, where it's always winter, and everyone is always one gender unless they're in 'kemmer' a cycle of sexual receptiveness and high fertility where the residents of Gethen can take on either male or female characteristics. The main protagonist of the novel is a male Terran named Genly Ai, who as been sent as an Envoy from the Ekumen, a coalition of humanoid worlds to see if Gethen is willing to join their coalition. He travels alone to the world to make contact, landing in the Kingdom of Karhide and spends two years attempting to convince the members of it's government to join the Ekumen. (He has companions with him, but they remain in stasis on their ship in orbit.)

The novel opens right as Genly Ai has been granted an audience with the King of Karhide, Argaven. The King's Prime Minister, Estraven, who helped him get the audience seems to believe in his mission, but the night before tells Ai he can no longer support Ai's cause with the King. This in turn causes Ai to doubt Estraven's loyalty, since he cannot read his mannerisms or body language effectively to figure out what prompted Estraven's withdrawal of support. The next day at his audience, Ai figures out why: Estraven has been exiled, ostensibly because he was too conciliatory toward the neighboring country of Orgoreyn in an ongoing border dispute. The King still takes the meeting with Ai, but rejects his offer to join the Ekumen.

After a detour to the dwelling of the people of the Handdarrata, one of the two major religions on Gethen, Ai pays for a foretelling that seems to predict the success of his mission and then sets off for the country of Orgoreyn, where he has received an invitation. He gets a warm welcome in their capitol of Mishnory, where he's pleased to find that their politicians are far more direct with him, but the exiled Estraven warns him to be careful and to not trust the leaders, as their secret police, or Sarf exercise true control over the country. Estraven's warning proves to be correct, for Ai is arrested, interrogated and sent to a work camp in the far north where he is forced into hard labor and given drug designed to prevent 'kemmer.' He falls ill and seems ready to die when Estraven surprises him once more by breaking him out of the labor camp.

Together, Ai and Estraven embark on a dangerous, long and arduous trek across the Gobrin ice sheet to get back to Karhide. The two of them eventually learn to accept each other's differences and Ai begins to finally understand Estraven, and by extension the society of Gethen. The two develop a close connection and Estraven finally convince Ai to wake his companions in the ship in orbit and send for them once they return, as he is convinced that Ai's reappearance in Karhide will force it's acceptance of joining the Ekumen. Estraven's prediction proves correct, as they reappear in Karhide and Ai sends for his companions- but Estraven, still under an order of exile in Karhide is killed attempting to flee back across the border to Orgoreyn. His death and the fallout from their reappearances triggers the fall of governments in both countries and they both agree to join the Ekumen, which complete Ai's mission.

The power of LeGuin's writing I think is to be found in her approach to the narrative. It's like a slowly blooming flower- you're not sure what you're dealing with at first, but as you read more and get deeper into the book you get drawn further and further in, so that it's only when you reach the end that you can truly understand how subtle and incredible this book actually is. In the opening chapter, we meet the characters including Ai marching in a parade in the capital so the King can place a keystone in a newly constructed arch. You completely forget about it until the end of the book when you read this:

Therefore for the first time it came plainly to me that, my friend being dead, I must accomplish the thing he died for. I must set the keystone in the arch.

That call back is so subtle and so powerful all at the same time, it rocked me back on my heels a little bit. The other interesting thing that LeGuin does is sort of world build as she goes. The chapters are interspersed with shorter vignettes about the mythology of Gethen, all of which helps draw the reader deeper into the world and by extension the story.

Overall: one of the iconic novels of science fiction, The Left Hand of Darkness imagines a world without gender and the struggle of an outsider to navigate it. While it's hailed as a masterpiece of feminist writing, I think readers might be surprised at how subtle it's feminism can appear. LeGuin doesn't sent out to make an explicit statement about the politics of gender- she just vividly imagines a world without it and in doing so makes a powerful statement indeed. ***** out of *****