July 26, 2018
I made a point of tracking down some Colorado whiskey when we went to Colorado last year, so it only made sense to continue that tradition when we went to Minnesota. I can't remember when exactly I first heard about Far North Spirits- but I do remember that I liked what I heard and wanted to track down a bottle of their Roknar Rye Whiskey.

We've been to the Twin Cities many times over the years and whether it was my early exploration of Surly or other things, Richfield Liquor has been my go-to for many a trip. Just north of the Mall of America, it's conveniently located, right on a highway and relatively easy to find. I headed there first in my quest for whiskey and, shockingly, for the first time ever, struck out. Not to be deterred, I tracked down another liquor store closer to our hotel in Eden Prairie, and where Richfield Liquor had let me down, Eden Prairie Liquor did not and I claimed my prize: 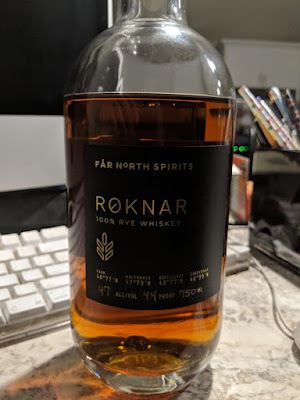 The design of the bottle and label sticks out first. It's clean, minimal and well designed- it stands out on a shelf and makes the product within the bottle look even better. (Though the color of this stuff alone is gorgeous enough to make me pay attention- such a beautiful, deep shade of amber.) Aren't convinced that 'Far North Spirits' is far north enough? Well, they added the coordinates for the farm, malthouse, distillery and cooperage, so you don't have to take their word for it- which is a beautiful touch that instantly had me fiddling with Google Maps to see what I could get it to do.

Speaking of which: I don't know if I'll ever get either the money or the ambition to open my own distillery, but if I ever do, I'd do it the way these guys doit. Not only it Roknar a farm to glass whiskey, it's a single estate whiskey- which I'm not sure I've ever tasted before. Everything is made in Northern Minnesota: 5% of the rye is custom malted in Fisher, MN. Barrels are made in Park Rapids, MN and the rest of the rye is grown on their farm near Hallock, MN. Eyeballing it on a map, I'd say all three of those locations are north (if only just) of both Fargo, ND and Duluth, so I'd say that more that lives up to the name of 'Far North Spirits.'

First Impressions: I think this is one of the first 100% rye whiskies I've ever tasted and the aroma was what made me sit up and take notice right at first. The viscosity is well balanced: this is neither weak and watery or heavy and syrupy. There's also a lot of spice to the finish.

Color: dark gold/dark honey when you hold it up to a light, a beautiful shade of amber when you don't.

Body: The aroma of this stuff is unusual... after a lot of sniffing, I concluded that there was a piney, woodey smell to it with almost a hint of sweet tree sap. (Far North's own tasting notes tell a different story, but I don't like doing tasting after reading someone else's tasting notes because I don't want to end up in a confirmation bias situation you know? If someone tells you 'candied orange peel' that's probably what you're going to end up looking for.)

Palate: There's a crisp burst of sweetness on the tip of the tongue with this one... initially, I wanted to say oranges, but on subsequent tastings it became more crisp in nature- almost like apples or other orchard fruits followed by a burst of spice.

Finish: spicy and warming, this is a pleasant finish indeed

Overall: Spicy and complex, this 100% rye is a whiskey worth finding if you're craving a different flavor of whiskey and happen to be in the Medium White North. I want to find me some more rye whiskey, because this was seriously good. My Grade: **** out of ****