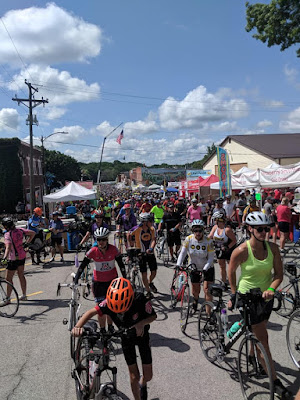 I mapped it out, just to be sure and from our drop off point to that beautiful beautiful intersection where The Missus and The Spawn were waiting for me on the other end, I went 51.5 miles on a bike.

I freely admit I was a little bit nervous going into it. I had been training and I had managed to do every distance in between the towns on the day's route, but I hadn't gone out on as many long rides as I would have liked, so I had no idea how the day was going to go. As it turned out, the day went pretty well- and it didn't start getting really hard until the end.

The weather was perfect. There were clouds, a beautiful cool breeze and the day took it's sweet time warming up. We were two miles outside of Harper to start and it was an easy ride into Harper and then it was off to Keota, five and a half miles down the road- which was another relatively easy jaunt, all things considered. I was feeling pretty good about the experience, taking it all in, soaking in the details of experiencing rural Iowa at bike speeds instead of car speeds. I think that was stuck out the most for me in the early going. You don't notice the little details or how green the fields really are. You grow up here and just sort of become immune to the landscape around you sometimes. It was experiencing Iowa from a whole different vantage point and I enjoyed that.

People watching was also fun in the front half of the day. There were so many different types of bikes and different types of riders and crazy, unique and wonderful ways to do this- and, more to the point there were so many of them! I mean, I knew RAGBRAI was a big deal, but until I got to Wellman (seen in the picture above) I don't think I realized what the sheer numbers that do this crazy thing looked like up close. It was mind-blowing and so so cool. It also was a huge motivating factor as well. It's hard to feel sorry for yourself and doubt your ability to keep riding when a retiree or a kid passes you 'on your left.' If they can do it, anyone can do it. (It was also college jersey day and I think between the three of us we managed to see most of the B1G represented- except Rutgers! Someone needs to send an invite out to Piscataway and get 'em out here next summer so they can at least complete the pictures of everyone was taking.)

Getting to Wellman was the hardest part- it was the longest haul of the day at 13 miles- but I had told myself going into this that if I could make it to Kalona, then I would have done a good job. After Kalona, it was all- well, not all downhill, but after the halfway point if you can get to Riverside, you may as well get to Hills and if you can get to Hills, you may as well grind it out and get to Iowa City which is exactly what I did. There were hills between Hills and Riverside that just about did my knees in, but blessedly after that it was gloriously flat, so the trouble went from my knees to my ass. My ass quit shortly after Hills, so there was a lot of stopping on the final surge into Iowa City. The numbness would go away gradually and be replaced by burning fire and pain.

But I did it. I walked up one hill the entire day (which I think is pretty good for your first time out) and rode the rest.

Could I do the whole week? I think the best answer I have right now is 'ask me after my legs stop hurting.' I think it would for sure require a time commitment and serious training and probably a road bike or a hybrid and not a mountain bike, which is what I used. Would I do another day? Probably. I would for sure be game for part of a day even- though upon reflection I think I was probably blessed with excellent weather and a relatively decent amount of climb. Had there been more hills or more heat, I don't know if I would have made it the whole way.

But all that being said, I did make it. Which seems kind of crazy to me- but it also denies me the excuses going forward. I biked 51.5 miles in a single day and lived to tell the tale about it. Who knows what else I can do?