This Week In Vexillology #227

September 02, 2017
I'm deep into an extensive one volume history of the Ottoman Empire, because- well, at this point I'm not sure why. The first decades of the 1600s were rough- lots of revolts and palace intrigues- I'm hoping the next chapter will be a little more interesting. But one foe of the Ottomans keeps popping up a lot and that's the Republic of Venice. So, I did some digging and this week I decided we're going to take a look at it's modern day descendant, the Regional flag of Veneto: 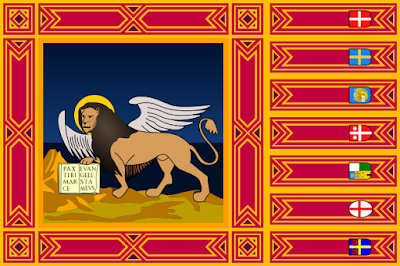 Adopted on May 20th, 1975 as the civil and state flag, the flag of the Veneto Region takes a lot of inspiration from the old flag of the Republic of Venice, which looks like this: 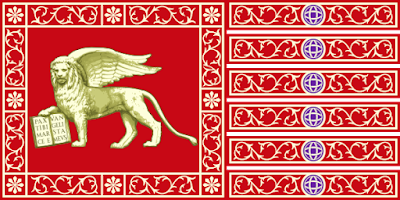 So, right away you can see where the inspiration is coming from- there's a little more to work with in the regional flag though. The coat of arms of the region is set in the central square- there, you find the winged lion of Saint Mark with the opened gospel. (The Latin motto means, "Peace to you Mark, my Evangelist.") The paws of the Lion rests on the landscape of Venice- the sea (Adriatic), the land (Venetian Plain), the mountains, (Alps.)

Here's where things get a little crazy though- because while this flag looks busy as all get out (maybe even too busy) from a design standpoint, the seven stripes at the fly edge are actually tails. So the flag, when flying, looks something like this: 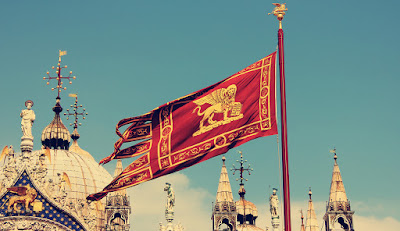 (Granted this is technically the historical flag of the Republic of Venice, but you get the idea.) The modern 'tails' have the middle of the coat of arms of each of the capitals of the Veneto region. The seven provinces are, from top to bottom: Vicenza, Verona, Venice, Treviso, Rovigo, Padua and Belluno. The wiki-page for the flag indicated that a ribbon should be knotted just belong the finial of the flagpole as well.

(Tangent Time: The Parentals had a really awesome book called 'The Times Atlas of European History' when I was growing up and I would lose myself in its pages on a regular basis, watching the rise and fall of empires and countries that I had never even heard of come and go over the centuries. One of my favorites was always La Serenissima, The Republic of Venice. I'm glad it's got such a bad-ass flag and that it's modern equivalent honors the historical roots of the region.)