September 25, 2017
Part 1 of my birthday goodies this year, Tomatin 12 Year Old is the non-Islay Single Malt I've been looking to get stashed in my liquor cabinet and I was eager to give it a taste. Turns out it's hook, 'the softer side of the Highlands' is well earned, because this single malt wasn't the ride I was expecting and was an entirely pleasant experience to boot. 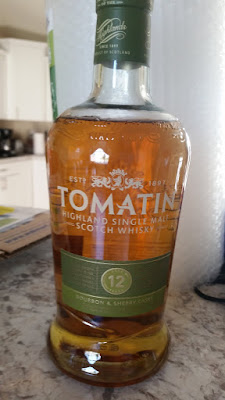 Doing some digging on the old interwebs, it looks like the distillery opened for business in 1897- though apparently cattle drivers would buy from a local still as far back as the 16th Century. It's had a few ups and downs over the years- it went bankrupt in 1906, reopened in 1909 and lasted all the way until 1986, when it was brought by a Japanese conglomerate that's been running the place ever since. The distillery is about 25 minutes from Inverness which places it firmly in the Highlands region of Scotch Whisky.

(Speaking of regions: I've knocked off the Highlands, Islay, Isle of Skye and Speyside. Pretty sure I've had some Glenkinchie, which is a Lowlands whiskey and would like to get ahold of some Auchentoshan at some point to get a little further into the Lowlands. Haven't seen any from Isle of Mull, Isle of Jura, Isle of Arran, the Orkneys or Campbelltown regions- so hashtag whisky goals, I guess!)

But how was the Tomatin 12 Year Old? Let's find out:

Color: Straw gold is probably the best description. It's not dark enough to be amber/honey, but it's not light enough to be yellow/pale yellow.

Nose: The aroma is unusual, almost astringent- apples or pears seemed to be prominent- some kind of tree-grown orchard fruit for sure. There's some kind of spice underneath- I want to say nutmeg, but I'm not sure that's right either. In a sentence: this smells like fall.

Body: It's sweet and spicy- the viscosity is nicely balanced- it's not heavy and syrupy and it's not weak and watery either. You get a rush of fruit followed by the spice hitting your tongue.

Finish: If there's one thing to criticize here, it's the finish. The after taste lingers longer than it should and the warming is... nothing that special. It's gentle and general.

Overall: I loved the nose on this- it was unusual enough to grab my attention immediately and I spent a lot of time figuring out what exactly it was I smelling. It's nicely balanced, but in general, I prefer the warmth of a finish to linger longer than the aftertaste does and Tomatin didn't make that happen for me. That's not to say this isn't good- it might even be very good- and the nose is different enough to make this worth trying. I'd give it a solid: *** out of ****