Bookshot #100: Before The Fall 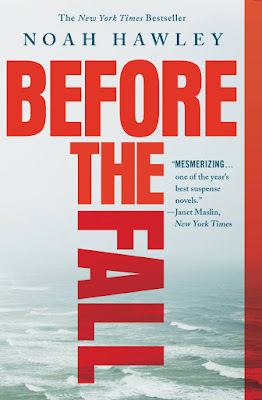 I was a huge fan of the television adaptation of Fargo, which Noah Hawley helped to write and produce (the Missus and I caught the first season on Hulu, but have yet to track down and watch the subsequent seasons) so when I heard that he was writing a book, I figured I would run it down and check it out. If he could produce things like Fargo and Legion (what little I've seen of it has been really, really good) then he had to be able to write an entertaining novel, right?

Before The Fall is a thriller in the best sense of the word- it keeps you turning the pages and trying to figure out what happened right up until the very end- and that's a pretty momentous feat, considering the fact that ten of the characters die in the opening chapters when their plane, flying from Martha's Vineyard to New York City plunges into the ocean sixteen minutes into the flight.

The only survivors of the doomed flight are Scott Burroughs, a down on his luck painter, and a young boy by the name of J.J. who is the son of television billionaire David Bateman. Scott somehow manages to swim both himself and the young boy safely to shore, but that's where the real mystery at the core of the book begins: why did the plane go down? Was anyone on board hiding a secret that could explain it all?

In the tumultuous aftermath of the crash, Scott attempts to stay out of the spotlight by accepting some help from an heiress interested in his paintings- but when Bill Cunningham (a sort of cross between Bill O'Reilly and Sean Hannity) launches into a quest to find out 'the truth' behind what happened to his friend and boss, David Bateman and his family, Scott's paintings get dragged into the light as well- as they are photo realistic depictions of disaster scenes- ranging from tornadoes to, of course, the aftermath of a plane crash. Suddenly, he's a suspect.

But there's also the matter of financier Ben Kipling- another passenger on the plane, who, it is revealed was about to be indicted for doing some business with some very shady people indeed (the implications are never fully explained, but seem to point to terrorist/unfriendly nations or possibly the Russian mob.) Are his dealings responsible for the crash? Did someone want to silence him?

The Bateman Family isn't entirely out of the picture either. David was a powerful man who had made plenty of enemies- his daughter had been kidnapped for nine days when she was an infant and now the family travels with heavy security. Could one of his enemies have been after him- could someone have wanted revenge?

The answer is one you don't see coming, but Hawley structures the book beautifully- not just focusing on the story of Scott, the survivor, but telling the stories of all the passengers and why and how they came to be on that doomed plane. Scott's paintings are also weaved into the narrative, with brief interludes describing each one as the story moves between characters and goes from the present and the aftermath to the past as the passengers each get on the doomed flight. It's the kind of structure that could easily make for a confusing mess of a story in the wrong hands, but works beautifully here, as piece by piece, character by character, the truth is gradually revealed.

There's a certain richness to this book that makes it stand out from your average thriller as well. Family, fate, survival, truth- all are themes that are played with and explored in ways both delicate and powerful- especially given the society we live in today. The final climactic interview between Bill Cunningham and Scott is an especially powerful defense of the truth in a world that badly needs people to stand by the truth- and not just some version of it.

Overall: I didn't finish it in a day, but this was a beautifully written page turner that I couldn't put down. If you're into thrillers then you've got to track this one down and read it, but if you're also just looking for an amazing, well-written book that will keep you interested, engaged and surprised- then this is a must-read for you as well. **** out of ****