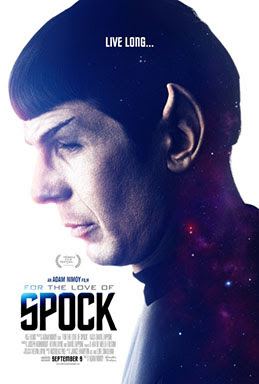 I've been meaning to watch this documentary for awhile now and throw it in with the last round of my grand Star Trek Cycle (tentatively set to conclude in October, for those keeping score at home) but instead, Amazon Prime released pretty much all the movies, so I made my way through those instead and decided to do this one on its own and I'm glad I did, because it deserves it's very own post.

Directed by Adam Nimoy, son of the late great Leonard Nimoy, the documentary was originally conceived as a documentary about Spock, the character with an eye on release in time for the the 50th Anniversary of Star Trek in 2016. After the passing of his father in 2015, however, Nimoy widened the scope of the film to include not just Spock, but the life and career of his father beyond that character.

If you're a fan of Trek, then you slide this one right next to the excellent Chaos On The Bridge as a 'must-see' for any fan of the franchise, however, there's a lot more to this than meets the eye. Leonard Nimoy had a career outside of Star Trek- including stints on the original Mission: Impossible and as well as roles in movies and television shows ranging from Gunsmoke to The Outer Limits and anything and everything in between. He directed Star Treks 3, 4 and Three Men And A Baby and had a stage career which included a stint as Tevye in Fiddler On The Roof (damn that must have been incredible to see) and The Man In The Glass Booth. (Again, would have been amazing to see that.)

But the true richness in this documentary lies in the glimpses of the personal life of the man behind the ears as well as his somewhat rocky relationship with his children, but especially his son. You see a man who arrived in California, determined to be an actor, got married, had kids and was doing every job under the sun to support his family until his breakthrough finally arrived. The character of Mr. Spock and how iconic he became had a huge impact on the lives of everyone in Nimoy's family- Adam at one point describes truckloads of fan mail arriving at the house and how back in the day, they were still in the phone book, so fans would call the house and sometimes even drop by to say hello. (Which is straight-up crazy to me... )

Overall: There's a ton of stuff that gets left out of this- with a life of 83 years, there's bound to be, but I do think it's a beautiful tribute not just to Leonard Nimoy's career and the character of Mr. Spock but to the life of the man as well. My Grade: ***** out of *****