This Week In Vexillology #203

March 04, 2017
I wanted to break my streak of 'Lost Weekends in Vexillology' and was looking around to see if there were any countries who had won their independence in early March, but Wikipedia provided me with a better notion thanks to me finding out that the Windy City herself, yes, Chicago was incorporated on March 4th, 1837. Which means that Chicago is celebrating it's 180th Birthday today! (Crazy to think I'll be around to see Chicago's bicentennial- at least I hope I will be, anyway.) So, without further ado: 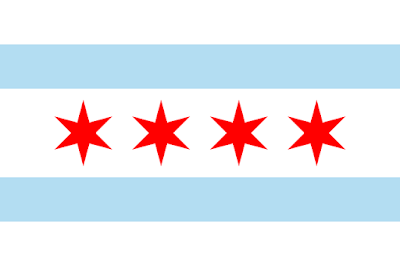 This is the flag of Chicago- and you know what? For a city, it's actually a surprisingly decent flag. Way back when, I came across a TED Talk about flags- which didn't exactly speak highly of either most state flags ('Seals On A Bed Sheet') or a lot of city flags, but happily, I don't think there's much to criticize Chicago for here. This is a nice flag... it's got a simple, clean design. It's not cluttered or full of unnecessary text and you could make an argument that this flag is fairly iconic. Show this to your average person in the street and there's a fairly decent chance that they're going to recognize it as the flag of Chicago. So this flag has a lot going for it!

Even better: there's a hefty amount of symbolism for us to break down with this flag. Designed by Wallace Rice and adopted in 1917 the flag features stripes of pale blue and white along with four six pointed stars (originally there were only two, but two more were added in 1933 and 1939 respectively.) Let's start with the stripes:

The stars are where things get complicated. From left to right:

Second star is for the Great Chicago Fire of 1871- it's original to the 1917 design and it's point represent: religion, education, aesthetics, justice, beneficence and civil pride.

Fourth star was added in 1933 and represents the Century of Progress Exposition and it's points are for all the bragging rights: it's status as the 'Second City', Chicago's Latin motto, 'Urbs in horto' "City in a garden", Chicago's 'I will' motto, the Great Central Marketplace, Wonder City and Convention City.

There's been talk over the years about adding a fifth star, but nothing concrete has ever really emerged as a good reason to add one yet. (Though the Cubs finally winning the World Series might prove to be a more persuasive argument now than it has in times past.) But there's a lot to like about this flag- it's got a ton of symbolism backed in there and looks great.

So that's Chicago- which I think might have the honor of being the first municipal flag I've ever looked at on the blog. How about that?