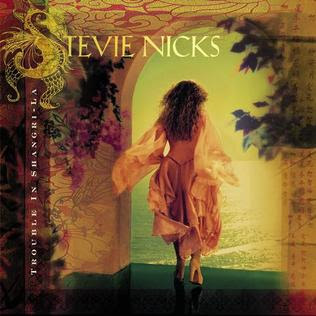 I don't know if it's something about approaching the middle of my third decade. Maybe it's the fact that I'm about a decade and a half removed from the start of my undergraduate experience and being younger, thinner, more irresponsible and more tolerant of hard liquor, but I'm starting to remember things that I thought had long since faded into the boozy shadows of my youth, One of which was my weird Stevie Nicks Period which started with Trouble In Shangri-La.

I've been racking my brain for weeks now, trying to remember how or why I decided to buy this album, but buy it I did and I listened to it all the damn time. Revisiting it was like stumbling across a really good book that you hadn't read in awhile and it belongs on a select few albums that I've listened to over the years where there's not a bad track anywhere on the album. Just hit play and go. Think it's just me that is all about this album? The commercial success says that other people agreed with me: in dropped in 2001- it was Stevie Nicks' first albums since 1994 and it got her back to the Top 5 for the first time since 1983. It went Gold in the first six weeks after it's release and had snuck over the 600K copies sold mark by 2011- and helped launch a successful tour. So this is a legit good album- or at the very least, people liked it.

Doing some digging on more background for this album and I found out several fascinating things: the slight patina of country throughout the album probably has a lot to do with Sheryl Crow- who helped out on the album and the most obviously 'country' song of the album, 'Too Far From Texas' was actually a duet with Natalie Maines from The Dixies Chicks, which explains why they showed up at some CMT Awards show to do a duet of 'Landslide.' But seriously though: I have no idea what Stevie Nicks is up to these days, but if she wanted to make a country album, she could make a kick-ass, chart topping one if she really wanted too, I think.

Several tracks that landed on this album have been kicking around since the 70s. ('Candlebright', 'Sorcerer' and 'Planets of the Universe') After her 1994 album was sort of received with a 'meh', she actually asked Tom Petty (a buddy of hers, apparently) for help recording a follow up album, but he told her to have more faith in her own abilities and that became 'That Made Me Stronger.' (It's actually kind of strange the meandering journey this album took from writing the tracks to actually becoming reality. 'Planets of the Universe' has been around since 1976. They finally got it right in 2001.)

I don't think I can pick a favorite track off of this album- they're all good. Stevie Nicks with an assist from Sheryl Crow would be excellent enough, but Natalie Maines shows up- Macy Grey lends backing vocals to 'Bombay Sapphires' and Sarah McLachlan helped out on 'Love Is' and provided the 'S' on the album cover. If I had to pick one, I'd go with 'Sorcerer'- but doesn't mean I don't like the other ones any less or any more.

Overall: Fleetwood Mac's Rumors has long been one of my favorite albums, so it's no surprise that I'd branch out and check out some of Stevie Nicks' solo stuff, but this album jumped into my life at a strange and distant point in the past that's hard to recall. It was my freshmen year in college- and this album will forever be drowned in nostalgia and memory for me. I was honestly surprised that I could find no evidence that I'd reviewed this album before. The fact that it's such a genuinely good album is only a delightful bonus. **** out of ****