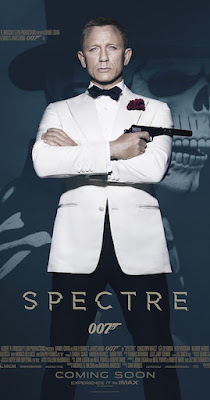 I'm still not sure how to feel about this movie. There was a lot about it that I couldn't stand but as a Bond movie, I felt like it was a solid outing that tied together an unusual four movie experiment for the franchise in a nice bow- it provides the perfect exit for Daniel Craig and sets up some interesting possibilities with the return of SPECTRE for subsequent movies.

So where do we find ourselves at the start of this movie? Well, there's a new M in charge and James Bond is using some vacation time in Mexico City just in time for the Day of the Dead. Of course, it's James Bond, so he can't just take a vacation, it turns out that he's on an unauthorized mission, killing three men plotting a terrorist attack on a stadium during Day of the Dead. He chases down their leader, Marco Sciarra and in the ensuing struggle, involving incredibly conspicuous explosions, fist fights in a helicopter that comes close to crashing into the crowd and then flies away and we get the theme song.

(Theme song: I couldn't tell you what this theme song is called- maybe it's 'The Writing On The Wall' but I honestly don't care, because it's fucking awful and it goes on and on and on and on forever. The credits make me long for the days of Maurice Binder and had me wondering when the Red Skull was going to show up, because they were very 'Hail Hydra!')

Back in London, the new M's has headaches a plenty. There's a new agency that's merging MI-5 and MI-6 headed by C (Andrew Scott) who thinks that the 00 program has outlived its usefulness and after their merger (which is days/hours away) then he's shutting them down. Bond and his little stunt in Mexico City only help his case and M suspends Bond from field duty. Bond seems unusually fine with this and it's not until after a visit with Q to get the usual gadgetry and a visit by Money Penny to his apartment that we learn that Bond had been sent a message by the previous M (Judi Dench) instructing him to track down Marco Sciarra and kill him.

On the trail of why exactly and who Sciarra is working for Bond (giving precisely zero fucks about being suspended from active duty, as usual) goes to Rome to attend his funeral to find out who the hell he's working for. Along the way, he legit seduces Sciarra's widow (Monica Belluci) with aplomb and vigor that is almost sociopathic- I mean, he admits to killing her husband and is all about seducing her anyway. Plus, is anyone else sick and tired of women in Bond movies sayings things like 'Don't go, James' and just dropping their panties at the drop of a hat? I mean I guess her husband was an assassin and all- so he might have been an asshole and she might be about rolling in the hay with the dude that killed her asshole husband, but JFC. It was a bit much even for a Bond movie.

After crashing a meeting of the mystery organization and learning it's leaders name, Franz Oberhauser, Bond is chased across the city and shenanigans ensue which eventually lead him to a dying Mr. White in Austria, who makes him promise to protect his daughter and tells Bond that she will lead him to L'Americain- whatever that is. So Bond goes to a clinic in the Alps (a nice Bondian call back to On Her Majesty's Secret Service) and meets Dr. Swann (Lea Seydoux) whom he has to get to safety after the bad guys catch up with them. They end up in Tangier, bound for a mysterious set of coordinates that seem to be in the middle of nowhere- so they hop on a train and head out there.

They finally find Spectre's headquarters, learn the master plan (they're behind C and his merger plan for MI's 5 and 6 and they've been staging terror attacks to push countries into joining their intelligence sharing network known as Nine Eyes) and they figure out who Oberhauser really is and his connection to Bond. His 'new' name is, of course, Ernst Stavro Bloefeld - but thanks to some shenanigans, Bond and Swann get away, blow up the place and leaving Bloefeld for dead, head back to London to shut it all down. Bloefeld isn't dead, of course, and there's one last round of shenanigans before Bond shoots down Bloefeld's helicopter, has the chance to shoot him, but doesn't- turns him over to M to be arrested and walks off into the sunset with Swann.

Overall: This was a decent, if unspectacular Bond movie. I felt 'meh' about it. It felt like a letdown after Skyfall. However, that said: Craig's arc of movies has taken the Bond franchise where it has never gone before- into a world of loosely connected/sequential movies and I think that's a good thing. I also like the quiet moments in this movie- the whole fight on the train sequence, which in any other Bond movie would have been full of dramatic music and variations on the Bond theme here was dead quiet until the climax. Like the only sound we got was the sounds of the fight itself, which was kind of cool.

The female characters with the possible exception of Money Penny all get short shrift here, which I hate. Bond has never been particularly 'good' when it came to women and seems especially retrograde in this movie. I mean, Dr. Swann having pronounced her hatred for Bond melts into his arms with an 'I love you' that was about as bad and inexplicable as Padme Amidala's confession in Star Wars Episode II: Attack of the Clones-  you just couldn't believe it. For real though: best female characters in Bond- Sophie Morceau as Elektra King in The World Is Not Enough and Michelle Yeoh in Tomorrow Never Dies. I'd have to go with ** 1/2 out of **** here. Not the best Bond movie I've ever seen by any stretch of the imagination.