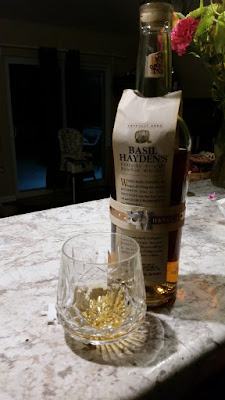 It's taken me three months to do it, but finally, at long last, Boozehound Unfiltered is making a triumphant return to the blog- and this time, we're back with bourbon! Basil Hayden's is something I've had before- but I think it was one of those Boozehounds that got lost in cyberspace, because I can't find any record of reviewing it anywhere. A Valentine's Day present from the Missus (she got flowers and a nice Moscato, I got the man equivalent: bourbon) I was eager to get into it and see if it was as good as I remembered it being and happily, it was!

As with all these bourbons, Basil Hayden's got started in the late 1700s, emigrating along with other Catholics from Maryland to the west- according to the Wikipedia page, he helped found the first Catholic Church in Kentucky and his family roots can be traced back to the Norman Conquest in England- so this is a family with a rich and proud history.

(The company website tells as a slightly less detailed story- though Basil is, of course, a badass rule breaker for adding rye to his corn whiskey and blowing everyone's minds.)

This whiskey actually has a distant relative in Old Grand-Dad, whose label actually features a likeness of Basil Sr. (The Old Grand-Dad distillery was founded by Basil's grandson, Hayden.) So I guess I know where my next bourbon is going to come from- have to see if the Grandson is as good as his forebear.

Let's talk some bourbon, shall we?

Body: pleasant aroma...  spicy.  i want to say cinnamon and nutmeg? there's a fruit there too. melon? or possibly peach? (This link over here says peppermint, honey and tea, but I'm not sure about that. Peppermint is very obvious in the palate)

Palate: You get a rush of the fruit up front and then the spice creeps in- cinnamon is prominent- though peppermint is in there too. Viscosity is good. It's not weak or watery- it's not too heavy and syrupy either.

Finish: Is nice...  it's not harsh at all and if there is, it's brief enough not to both you in the slightest. This is an excellent finish.

Overall: This is an excellent bourbon...  and it's versatile as well. I've had this stuff mixed with Coke Zero and used it in a Whiskey Sour and drank is straight. It's been perfect every single time. To be honest, I think I need to drink more bourbons- because, well, it's delicious and I think it's always good to expand your boundaries a bit, but really, I think if someone asked me to recommend a good bourbon, it would be this one. **** out of **** (Would absolutely buy this again!)