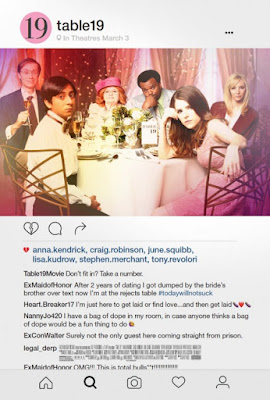 I have no idea why critics are down on this movie so much, because both the Missus and I enjoyed the heck out of this movie. Anna Kendrick stars as Eloise McGarry who is invited to a wedding at sat at Table 19, the table in the furthest corner, full of people that the hosts had really hoped would not bother to attend. Eloise is angry because in coming to the wedding, she has to see her ex-boyfriend, Teddy again, who has recently dumped her for Nikki who took over Eloise's former position as Main of Honor in the wedding. As she's loitering outside the entrance to the reception hall, a tall, dark and handsome looking off-brand Hemsworth Brother (actually, he's not a Hemsworth Brother, but he looks like he could be one.) flirts mysteriously with her, but she blows him off and eventually meets the rest of her table.

Jerry and Bina are business associates and diner owners that vaguely know the father of the groom. Renzo vaguely knows the family and is skipping his Junior Prom because his Mom thinks that going to a wedding will get him laid. Jo Flanagan used to be the nanny of the bride and Walter (who, as it turns out, is doing time in a halfway house after committing an initially unspecified white collar crime) knows the bridge as well. They all sit around and commiserate while Eloise stews with anger at her ex, eventually storming out to confront him, which doesn't go well. She encounters The Off-Brand Hemsworth Brother again and they make out, before he mysteriously vanishes again. And she runs off to the bathroom to hide and Nanny Jo figures some shit out that at first made me all like, "Nah, she cray." But in fact, Nanny Jo gets it right and then...

Then the movie sort of turns left in way that you don't see coming. I'm not going to tell you what it is, because it'll totally spoil the movie, but it is a hard left turn and it's actually kind of refreshing. I guessed what the deal with The Off-Brand Hemsworth Brother was and in any other movie, that would have been the obvious direction to go. There would have been some comedic hijinks and some usual rom-com tropes and then that would have been the end of it. That movie, I could understand getting a critical drubbing. This movie avoids the tropes though and it works- because instead of plodding through the trappings of literally any other wedding comedy that you've ever seen, the occupants of table nineteen actually find out about each other and get to know each other and realize that they've all got problems and if they're going to be the table of unwanted misfits they might as well own it. That realization actually helps all of them to solve their problems and the movie ends happily. Not in the way you were expecting, mind you. But it's certainly a happy ending.

This movie got a bum rap from critics. The cast is good. Anna Kendrick can charm her way through anything. Craig Robinson and Lisa Kudrow really, really work as a couple- which is sort of surprising, but it's actually the best casting of the movie, I think. June Squibb does the Nanny thing well and Stephen Merchant is tall. And strange. But that works for him in this movie.  If I have one quibble with this movie it's that The Off-Brand Hemsworth Brother ends up being a gigantic red herring of a dangling plot thread, but at the same time, when the movie takes it's hard left turn, it doesn't really matter that much when it's all said and done. (Oh and hey: props to the wedding band in this movie. Excellent 80s covers.)