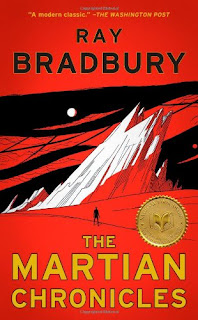 This is one of those books that I've always wanted to read but have never been able to find until a random trip to the library last month. The Martian Chronicles has been cited so much in books that I've read that it seems insane that it's taken me this long to get to it, but there you go. It feels foundational, in a way, like Heinlein's The Moon Is A Harsh Mistress or Frank Herbert's Dune or any of the Chronicles of Barsoom- real old school science fiction that if you're going to really get into science fiction, you've got to pick this book up at least once and read it.

A ghost of American Literature in 11th Grade also came back to haunt me with this book. We read Winesburg, Ohio by Sherwood Anderson that year- one of the many books I need to revisit for my sins at some point, but at the time, I didn't understand it, didn't get it and generally speaking rolled my eyes at it. Imagine my surprise when Bradbury revealed in the introduction that the whole idea and structure for The Martian Chronicles was directly inspired by Winesburg, Ohio. (Which means, damn it, that I have to find Winesburg, Ohio and read it. And probably send an apology to my 11th Grade American Literature teacher.)

So what does that mean, for those who haven't read Winesburg, Ohio? Well, it means that The Martian Chronicles doesn't follow a traditional novel structure- it's not really a collection of short stories either- though some pieces in the book are probably long enough to qualify as short fiction. Instead, it's a journey stretching from 2030 to 2057 and telling the story of the multiple expeditions sent to colonize Mars- what they found there, how it changed the settlers and what they were trying to escape and why they all left to go back home. And, in a word, this book: amazing.

I don't even know where to begin with this, honestly- it grabs you from the first piece- 'Rocket Summer' and pretty much sweeps you away from there. The process of actually getting to Mars and staying there is a little trippy- but by a third of the way through the book, gems and sparks start jumping out at you. Pieces like 'The Green Morning' (about Benjamin Driscoll- Mars' Johnny Appleseed, planting trees wherever he goes) 'The Fire Balloons' tackles faith and space travel beautifully- as the first Reverends/Priests arrive on Mars. 'The Wilderness' is a haunting look at three of the first women to travel to Mars. (Bradbury takes colonization in a pretty old school- maybe even reactionary way- so the men go first and then send for the women- but if you can get past how dated that feels, it's a good piece.)

The book builds to an excellent climax- I'd be fascinated to figure out if 'Usher II' and it's references to a 'Fahrenheit 451' type of world the protagonist left behind on Earth inspired Fahrenheit 451 or if Bradbury was going to write it anyway (The Martian Chronicles was published in 1950, Fahrenheit 451 in 1953). 'The Luggage Store' and 'The Off Season' talk about the deteriorating situation back on Earth, which eventually turns into atomic war. ('The Off Season' is perfect. Just perfect.) After the war breaks out, every one goes home and the few stragglers left behind slip into isolation and despair- and everything they built on Mars begins to crumble- until the first survivors from Earth make it back by the end of the book. ('There Will Come Soft Rains' which manages to make you feel incredibly sad for an intelligent house and 'The Million Year Picnic' which is also incredibly melancholy but a perfect way to end this book.)

Overall: I added this book to my Amazon Wishlist. I had never read Ray Bradbury before this book- I've got Fahrenheit 451 to get through as well, but this is such a beautiful, melancholy, haunting and hopeful vision of Mars- I think time and advances in science probably make this seem a little dated in parts, but if you focus on the idea that it's a vision or a dream of Mars, that helps. But it's more than just the subject matter that works for me too- I've always been a sucker for good science fiction, but the writing is amazing as well. Bradbury isn't just satisfied to tell you stories about Mars- he can take you there. **** out of ****