This Week In Vexillology #177

August 13, 2016
This Week In Vexillology, we're sticking with International Organizations, but we're stepping away from the world of sports for the flag of the North Atlantic Treaty Organization instead: 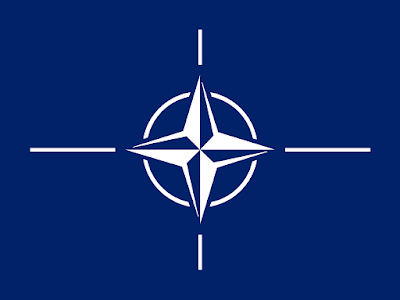 I've always liked the flag of NATO. It looks sharp as hell and kind of kick-ass to be honest. Did the Warsaw Pact* have a flag? In the immortal words of Eddie Izzard, 'do you have a flag?' Because NATO has one hell of a flag. I dig it. I'm going to even go further and say that this flag helped us win the Cold War. If Rocky can claim some credit, so can this flag. It rocks.

So what's the flag of NATO all about? Well, it's been around since October 14th, 1953 and some nice symbolism behind it. The dark blue represents the Atlantic Ocean (I'm guessing the northern part, since well, it's 'The North Atlantic Treaty Organization')The circle stands for unity among the member states. The compass rose in the center represents the direction toward the path of peace, the goal that the organization strives for.

There's a lot of people that seem to think that NATO is sort of a relic of the Cold War, but I actually kind of dig the organization. I feel like in general, it's a source of stability for the western democracies and keeps them talking- and it's a good thing. Plus in French I'm pretty sure the acronym is OTAN.  NATO/OTAN seems like a really cool avant garde techno group.

So there you go: NATO! Remember, until next time keep your flags flying- FREAK or otherwise!