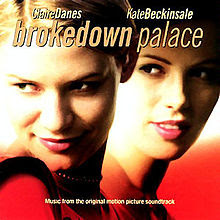 So, I churned out another piece of short fiction, which I ended up calling Silence. But that sort of lead me down the memory hole a little bit- first to this song, and then to the entire soundtrack to Brokedown Palace.

If you don't remember the film, well, that's not surprising- because it came out in 1999 and didn't do all that much at the box office, but Clare Danes, Kate Beckinsale and Bill Pullman starred and basically, Danes and Beckinsale are the young, adventurous travelers that go to Thailand, party hardy a little too much with a random dude that plants heroin in their luggage. So they go to prison and Pullman is the lawyer tasked to get them out. He gets one of them out but not the other. And that's pretty much the movie.

But weirdly, it has a pretty good soundtrack. In fact, I'd go so far as to say that the soundtrack is probably the best part of the movie. Thinking back on it, I think that 'Silence' had to have been getting radio play- because I can't think of another reason I would have gone out of my way to track down the soundtrack- which in turn, lead to a certain amount of curiosity about the movie- so I had to track that down and watch it to see what it was about.

It's very late 90s, in many respects. Moist's 'Leave It Alone', Nelly Furtado's 'Party's Just Begun', Plumb's 'Damaged' and Delerium/Sarah McLaughlin's 'Silence' all sort of fall into that post-grunge, vaguely melancholy, but yet not type of a sound, while tracks like 'Naxalite' from Asian Dub Foundation, 'Fingers' from Joi, the cover of 'Rock The Casbah' by Solar Twins sort of have a vaguely techno/EM/90s dance feel to them. That might strike some people as a contrast that's oddly contradictory, but it also reflects the tone of the movie- which is what a soundtrack is supposed to do.

I mean, you've got happy, party, club-drugging going on and then suddenly, heroin, Thai judicial system and Thai prison. Weird mix, overall, right? (There's also a trio of tracks that are heavy on the drama with 'Even When I'm Sleeping' from Leonardo's Bride, 'The Wind' from PJ Harvey and 'Deliver Me' from Sarah Brightman.)

Having run through this again, I have to say that the song that flung me down the rabbit hole back in the day- Silence, doesn't actually stick out or hold up all that well on further reflection. It's an earworm of a song, but its a bit waily and sort makes me think of Evanescence in many ways and the whole vaguely Goth thing just doesn't work for me now the way it did back then. But, there are a trio of tracks I think you could probably keep off of this soundtrack:

First, Contradictive by Tricky/DJ Muggs. Love this song. Very, very chill and the lyrics are nicely introspective. I mean, 'reflect on your life' is something we should all do from time to time, right?

Second, I'm going to go with Party's Just Begun by Nelly Furtado. Whatever happened to her? Is she still out and about doing things? (Again, very chill, very nice song.)

Third, I'm going to award a tie to Policeman Skank by Audioweb and Naxalite by Asian Dub Foundation. (The latter because I secretly hope there is actually an Asian Dub Foundation somewhere out there that's dedicated to make dubs of Asian films. Or Asian dubs of every other film?)

Overall: If the soundtrack to your movie is better than your actually movie, you've probably got problems, but this actually holds up pretty decently, all things considered. Not sure how you'd judge it against other soundtracks out there- I'm sure Tarantino has but together a few that would be better than this one is, but for another trip down the rabbit hole to the late 90s, it's not a bad time. Just don't watch the movie and you'll be fine. My Grade: B-