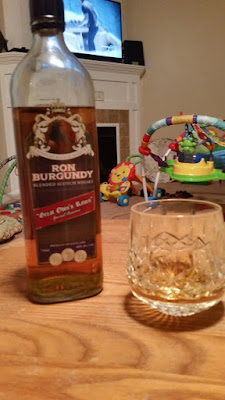 When I first heard of this, I was dubious. It seemed like a publicity stunt, to be honest. As this article from Forbes points out, foodstuffs that are marketed as tie-ins to movies tend not to be all that memorable- (the author of the article cites Ghostbusters Cereal as his exception to the rule, but I'd counter that with Ecto-Cooler) and he would be right. But here's the thing, whoever decided to do this actually put a little bit of thought into it, because at the end of the day as this review from Slate noted, this stuff? It's not terrible.

Its a blended scotch, not a single malt, so budget wise it's a lot more reachable than single malt, hovering around the $25-$30 buck mark at the store I snagged this at on our super fast visit up to The Cities last month. The blend is 60% malt and 40% grain and includes whiskies from Speyside, the Highlands and Islay.

But how is the whiskey itself? Let's check it out:

Body: Deep, rich and delicious, there's lots of dark fruits here. Figs, plums and raisins seem to be the most prominent.

Palate: If there's a weak point, it's probably here. It does sit lightly on the tongue and there's a nice touch of spice, and while vanilla and figs are prominent in the taste, it just doesn't work that well for me. It feels weak and watery when it should be smooth and robust. It's kind of a let-down given how good this stuff looks and how nice it smells.

Finish: Gradual but firm, the burn sort of sneaks up on your a bit, but it isn't harsh. So there's that anyway.

Overall: Ironically, it's the kind of hooch I can imagine a local television anchor actually drinking. It is genuinely not that bad. But the flip side of that: it's not that great either. A solid offering from Mr. Burgundy that's drinkable, this should make me sing, 'I love scotch, scotchy, scotchy scotch' but it doesn't quite get there. It smells great, but ends up as sort of a 'meh' experience. My Grade: C+