August 31, 2016
I've been watching the unfolding controversy over the whole Kinnick House controversy that's embroiling Manville Heights in yard signs with a certain amount of anarchic amusement. In general, I tend to roll my eyes at any NIMBY-type movement and start rooting for the other side out of sheer bullheadedness.  Plus, it's not like this is a Rose Oaks type of situation, where actual poor people and minorities are getting screwed. No, this is a rich neighborhood, where a rich guy wants to build a second home for his family and of course, all the other rich folks are up in arms about it.

I saw the yard signs denouncing the 'PARTY VENUE ON LUSK AVENUE' and like many I'm sure that read them, my first question was, 'where the hell is Lusk Avenue?' And, thanks to Little Dude falling asleep in the car, I decided to track it down and see what the fuss was about. I've decided that unless you're either a. a resident of Manville Heights or b. Irving Weber's Ghost that's been in Iowa City since time began, you won't be able to find Lusk Avenue without consulting Google Maps. I had to pull over to figure out where the hell it is, otherwise, I never would have found it.

Once I did find it, I took this attractive looking picture of a piece of open space that I assumed would be the logical place for a 7,500 square foot house. Isn't it pretty? 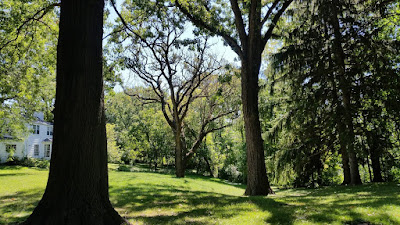 Well, turns out, I was wrong. According to the news articles, the house is slated to be built at 101 Lusk Avenue, (click the link to find out what it looks like, at least according to Google Maps.) Now, I'm curious: how the hell are they going to build a 7,500 square foot anything in a space that small? (Well, at least it looks small. The lot size, at least according to this handy dandy link seems to go all the way to the railroad tracks. So there's space there.)

So there's a petition, there's a website- NILE SAYS NO, damn it. NO KINNICK HOUSE IN OUR 'HOOD. My general reaction: 'meh.'

Yes, Lusk Avenue is narrow and fire trucks may well have trouble turning down it, but the argument that taxpayers are going to have to pay for upgrades to the infrastructure is idiotic. They will anyway at some point. It's a narrow, tiny ass cul-de sac that has seen better days. Sooner or later the city will get around to upgrading it, so why not make it sooner?

Calling it a 'party venue' seems a bit disingenuous as well. There's no evidence to suggest that the people building this thing are going to use it as a party venue. Yes, it's large, but I don't know, they might have a large family, you know. Maybe they all like to go to Iowa games together? Who knows. They said they wanted it as a second house, and well, I'm going to take them at their word. Yes, it's a large second house, but they're rich. That's how you get to afford to build a house in Manville Heights.

There might be something to the notion that it could become a must see for the Hawkeye faithful, but I'm not buying that either. I mean, you've got to actually find Lusk Avenue for one thing.