They're Scared Because They're Calling Everyone Else Crazy 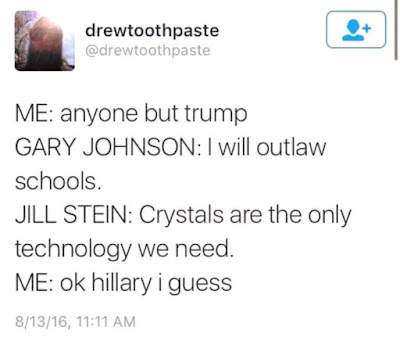 First of all, it's wrong. At least when it comes to Johnson. Seriously, go look at his website and see for yourself. And lo and behold nowhere do the words, 'I WANT TO OUTLAW SCHOOLS' actually appear. In fact, it's quite the opposite. Does the government waste our money? Yes. Should we abolish the Federal Department of Education? It's not the worst idea in the world, but it's hardly a radical idea either. Pretty much every Republican Presidential Candidate since I've been alive have wanted to do the exact same thing.

Is it fair to Jill Stein? Debatable. She hasn't exactly helped herself this time out, but her platform remains solid- and more to the point, especially when it comes to political reform, comprehensive and ambitious. She's raising issues that need to be talked about.

Look, I get the arguments against third parties, I do. I get that any sustained, long term success is going to involve building a solid infrastructure on the local, then state, then national level and then going from there. I also think that the Greens and the Libertarians are too wedged into their little corners of the political spectrum to ever be a serious threat to either of the mainstream parties. Plus, our system doesn't allow for large numbers of parties, but one, even two smaller parties with actual representation on any level in a sustained way would force coalition building onto a political establishment that gets too much joy out of finger pointing and accusations of obfuscation.

I've been listening to both of Dan Carlin's Podcasts for awhile (Common Sense and Hardcore History, both of which are excellent if you're in the market for a podcast) and he pointed out something that resonated with me. When the Establishment is under threat- and 'establishment' in this case, refers to the mainstream wings of both parties, that together really aren't that far apart on the issues when you get down the brass tacks- then the challenges to their dominance are usually referred to as 'crazy' or some kind of 'threat' to the status quo.

It's not new, as Carlin pointed out. LBJ had his infamous Daisy Girl ad. Richard Nixon ran as a law and order candidate portraying George McGovern as crazy. Ronald Reagan was going to kill us all because, well he was crazy. It's a classic formula: when the Establishment is scared, they'll call everyone else crazy. Shut up, they'll tell you. Get in line. Suck it up and vote for the our guy.

Do I know who I'm going to vote for yet? Nope. But when I see memes like this one, it both pisses me off and makes me happy all at the same time. The Establishment is scared- and if they're not scared, they're uncomfortable. And you know what?

I'm okay with that.

*Reading the comments on the Facebook post that came with it, I was somewhat heartened to see a whole bunch of people pointing out what bullshit descriptions of Stein and Johnson these are. Good. Maybe it'll piss people off enough to vote for them.