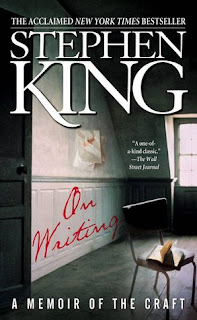 I don't know why it took me so long to finish this book. I don't even remember when or where I got it, which is kind of sad, but I burned through half of it and then put it down for a very long time, until about a week ago, I picked it up again and blazed through the rest. On Writing is a fascinating journey conducted by none other than Stephen King, who, I think we can all agree, might know a thing or two about writing.

Starting with his life story- more or less, King charts his early interest in writing, which eventually lead to his early struggles to break through and then his break through and then all the rest that followed including his descent into drug and alcohol addiction and his way out. For the second part of the book, King starts to do something amazing: share his knowledge about writing and what makes good writing and, more to the point, how to be a better writer.

I think it's the tone of the book that makes it special. It's not stern and unbending, it's not a dense and hard to dig through- King keeps the tone conversational and smooth. It bobs right along and it's a page turner- which seems appropriate, given the number of page-turners Mr. King has churned out over the years. But at the core of things, it's the fact that it's Stephen King writing that book that blows your mind. The guy writes books that people read. There's no pretension of high literature or art. No metaphors or similes, just one of the most successful authors out there telling you what he honestly thinks about writing. How amazing is that? People have always wished they could pick the brains of various experts out there- everyone has to have had that idle thought now and again. 'What would it be like to talk to [fill in personal inspiration/sports hero/favorite whatever/whomever]?' This book is probably the closest you can come to actually doing it in real life.

True story though: I've honestly never read that much Stephen King. I'm not really a horror guy, to be honest. My parents did have a copy of The Eyes of The Dragon lying around which I remember reading as a kid. But The Stand? The Dark Tower series? Haven't a read a word of them. Though after racing my way through this one, I think I'm going to have to find a way to sneak them into my rotation- though when I'll find the time, I haven't the faintest idea.

Whether you're into writing and want to be a writer (or already are a writer) or you just appreciate reading about people who have a passion for a subject, whatever it is- this book is empowering as it is entertaining. King's enthusiasm for writing is infectious and you can't help (especially if you want to take your writing somewhere, like I do) but want to run out to the store, buy pen, paper and get to a desk and buckle down and do some writing. After all, to paraphrase and slightly mangle that one quote from Shawshank, 'if you're not busy living, you might as well be writing.'

Overall: A nice, compact volume backed with wisdom and a revealing look into the life of one of the most successful authors of the past few decades, On Writing is a download of wisdom from one of the greats that is impossible to put down and, if you haven't read it already, it's begging to be picked up. **** out of ****. If you haven't found the time to read this book, find it. You won't regret it.