June 18, 2016
It was Flag Day this week and although I'm technically on vacation at various points to the south and west I figured what better way to celebrate Flag Day than to take a look at the flags of the various states that we're visiting while we're out and about for the long weekend.  First up, Kansas: 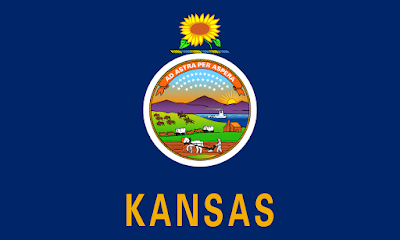 Yikes. The unfortunate trend of 'seal on a bedsheet' which is all too common for state flags is alive and well in Kansas- and, just in case you were wondering what state you were in, should you happen to see a Kansas flag flying, it helpfully informs you: KANSAS as in, THIS IS THE FLAG OF KANSAS. Which is a pity, because the seal is actually pretty decent as these things go.

First up, we've got a sunflower (Kansas is 'The Sunflower State') over a bar of gold and light blue. Then we get into the seal, which has a lot going on. There's a landscape with a rising sun. A river and a steamboat (for commerce) a settler's cabin and a dude plowing a field (agriculture), a wagon training heading west (American expansion), Native Americans hunting bison, and a cluster of 34 (yes, 34) stars above it all because Kansas is the 34th State. Oh and the state motto: 'Ad Astra per Aspera' or, 'to the stars, through difficulties!'

The seal does look nice, I'll give it that, but holy hell, you need a decoder ring to figure out everything that's going on here...  oh well. ON TO THE NEXT ONE! 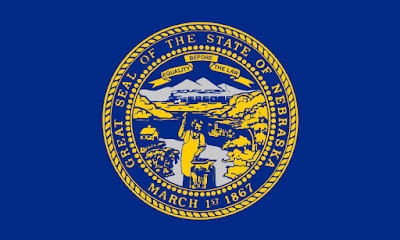 Gah, what fresh hell is this? To be totally honest, I had never in my life looked at the flag of Nebraska before this moment and now, I begin to understand why- while there isn't exactly a ton of design creativity put into your average state flag, Nebraska seem to be an exercise in either pragmatic practicality or sheer laziness. 'Hey, we need a flag.' 'Well, do we have a seal?' 'Yeah.' 'Well, just slap it on a bedsheet. There. Done. Back the fields, everybody!'

And before y'all get up on your high horses and get all on me for being Iowan and not liking Nebraska, no less an authority than the Norther American Vexillological Association thinks this thing is a dumpster fire. It ranked 71 out of 72 US States and Canadian province flags. Which means that you're not crazy, Nebraska is worse than you imagine. (And they know it too! In 2002 there was some discussion of creating a commission to maybe, just maybe, design a better flag. They decided not too. Oh well.)

As with Kansas, you need a decoder ring to figure out what the hell is going on with the seal. A train steams across the background toward the mountains, a steamboat plies the waters of the Missouri (though how do you know it's the Missouri? Could be the Platte, right?) A cabin and some wheat sheaves represent the importance of agriculture, a blacksmith is busy doing his thing with an anvil in the foreground. And the state motto is at the top of it all: 'Equality Before The Law.'

(I do give Nebraska a little bit of credit. You do sort of have to look for a second to figure out what state this flag belongs too- not like others where it's all KANSAS and in your face about it.) Okay, let's finish the trifecta, shall we? 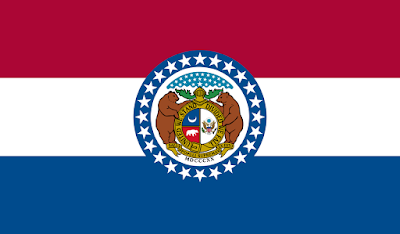 Wrapping up our little jaunt around the heartland of America, we've got what's honestly the best looking flag of the Trifecta and again, I find myself surprised: I've never honestly looked at a flag of Missouri, but hey, here it is and it's actually pretty decent. (NAVA Survey Ranking: 48th out of 72.) A horizontal tricolor, the red-white-blue combination reflect the state's ties to France from back in the day. The red and white stripes represent valor and purity, while the blue stands for three things: permanency, vigilance and the justice of the state.

In the center of the flag, you've got the state seal of Missouri surrounded by a ring of 24 stars representing- you guessed it! Missouri's position as the 24th State admitted to the Union.

Then, we get to the seal. While it's not super crowded like Nebraska or Kansas- it's more of a traditional set up, there's still a lot going on here, which is sort of exasperating, but whatever. Here goes: in the center circle- we've got the Great Seal of the United States on the right, a crescent moon (newness of statehood and the potential for growth) and a bear (strength and bravery on the left). The whole circle is surrounded by the motto 'United We Stand, Divided We Fall' and although it's very hard to see, at the bottom of that is a belt buckle, which symbolizes the state's ability to secede from the Union if they wanted to. Two big-ass grizzly bears support the whole thing.

Below that, we see the state motto: 'Salus Populi Supreme Lex Esto' or, if you like, 'Let the welfare of the people be the supreme law.' Below that, you've got the year 1820 inscribed in Roman numerals, even though Missouri didn't actually become a state until 1821.

Above it, we've got a helmet which represents that state's sovereignty and a large star (Missouri, the 24th state) surrounded by 23 other stars and the wavy line below it is supposed to be a cloud, which represents the difficulty Missouri had becoming a state to begin with.

So there you have it, our official Flag Day Weekend Trifecta. Remember, until next time, keep your flags flying, FREAK or otherwise!