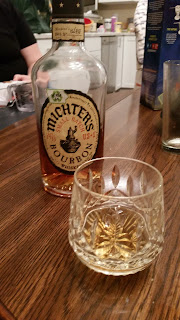 This month's edition of Boozehound Unfiltered capped of a very enjoyable evening with friends and family. We grilled out, we ate, we got the baby to sleep and the kids safely enraptured by the wonders of watching Frozen for the umpteenth time. (Shout-out to one of the nieces, who fell asleep and ended up half falling off the couch and had her head on the floor- which would have woken pretty much anyone else up, but she slept through it like a champ.) Then, we busted out the beers and the booze and had some adult fun.*

As a company, the Michter's brand can trace it's history all the way back to the American Revolution and 1753 Pennsylvania- George Washington himself visited the distillery and purchased whiskey to keep his soldiers warm during the long winter at Valley Forge. It's changed names a couple of times over the centuries, but survived prohibition and all the way up to 1989 before a downturn in the industry forced bankruptcy. Happily, the brand was revived by the mid-90s and relocated to Kentucky where it's been ever since.

Their website is pretty impressive- lots more detail on the history and the technical aspects of their distilling- which admittedly is something I need to learn more about. They're a small batch/single barrel production- so their overall range is small-only four offerings to choose from. But if their bourbon is any indication, tracking the other three down might be something worth doing.

Let's have a taste, shall we?

Body: Complex...  I got the usual mixture of vanilla and cinnamon with a touch of raisins- but there was also some underlying fruit that eventually teased itself out to be a combination of prunes, figs and plums. Very rich- and intriguing.

Palate: Nicely balanced on the tongue- it's not too weak/watery or strong/syrupy, the spices that were evident in the body become far more important here, with cinnamon and possibly nutmeg or all-spice (I couldn't really tell- there was something other than the cinnamon, I knew that.)

Overall: Rich and complex, this was one the best bourbon I've drunk in awhile. It's got an appealing body and an even better palate and finishes nicely. If you're looking to shake up your bourbon routine, get out there and grab a bottle of Michter's. You won't regret it. My Grade: B+

*I also got to try a wee dram of Ardbeg's Correyvreckan, which I'd like another shot at. That was a little later in the evening and let's just say that my tasting notes were somewhat sketchy to non-existent- but the weirdest part of all? It tasted like tequila to me- and not good tequila. Like Cuervo. So I'd like another chance to take a sipple and see if I'm wrong.