#12 and #5: The KC Experience and Another State Down 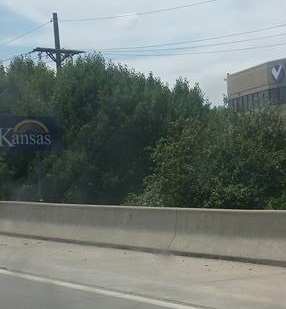 Despite having been to Kansas City at least twice before this trip, I don't think I've ever managed to sneak across the border that's like, right there and check out the other side. We made it official this trip since we had to return our too short barstools to IKEA, where, as usual, we brought too much candy and spent money. (We also snagged some Ligonberry Jam so we could make peanut butter and jelly sandwiches for our lunches instead of just PB sandwhiches, but tragically, it didn't make it out of Lincoln, NE.) So, I've been to Kansas, which brings my total up to 36 states! Only 14 left to go!

But we also got a better sense of Kansas City as a place... we sort of had to tailor our schedule to take Little Dude into account (who is one sweaty baby and dislikes heat intensely) and with intense heat blanketing the area on our arrival, we sort of chilled out a little bit and took some time to enjoy ourselves. That's not to say, we didn't do nothing- we checked out the Farmer's Market: 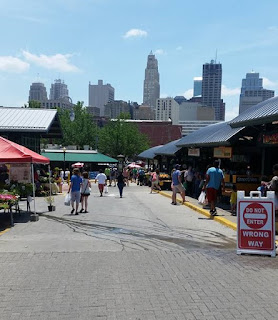 I would have loved to have had a little more time here to browse around, but damn it was hot... we did score some salsa for the Mother-In-Law and ate at a super cool Brazilian joint that made for a tasty lunch- we also caught site of KCMO's opposite, KCK: 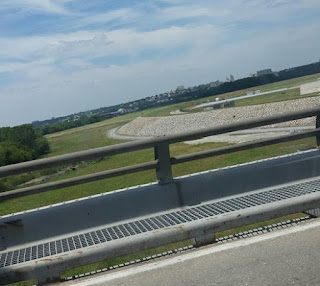 And of course, we had to round things out with the obvious culinary choice: 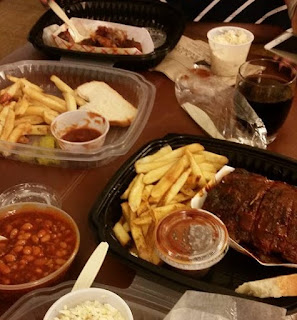 I think this alone makes a return trip to Kansas City worth it. This was excellent BBQ... the beans were hickory pit beans that were so tasty that Little Man was asking for more and the burnt ends were incredibly tasty. I've been to the Power and Light District before and I've been to Arrowhead before but honestly, I think this probably was the pinnacle of my Kansas City experience thus far.

I think I've got a little more research to do and maybe a return trip or two to be sure, but I think we can throw Kansas City in the old rotation of 'possible weekend destinations.' The food alone makes a return trip worth it- and there's still plenty left to see for any future trips down there.