This Week In Vexillology #170 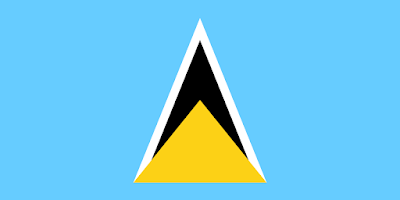 This Week In Vexillology, we're still kicking around the Caribbean Sea moving north from Trinidad and Tobago to take a look at the flag of Saint Lucia. (Which, yeah, bears a passing resemblance to the Delta-Symbol from Star Trek- at least a little bit, anyway.) Settled in 1635 by the French, Saint Lucia got passed back and forth between the British and the French multiple times over the centuries until the Treaty of Paris in 1815, which saw Britain take final, permanent control of the island- it became a crown colony of the United Kingdom that year. It joined the West Indies Federation from 1958-1962* and when that didn't work out, it became an associated state of the United Kingdom and adopted it's currently flag which it retained after independence in 1979.

What does it all mean? Well, the blue in the flag is for the sky and the sea (specifically the Atlantic and Caribbean). The black and the white are for the harmonious relationship between the black and white races. The yellow is for sunshine and prosperity while the two triangles represent Gros Piton and Petit Piton, two volcanic cones located on the island. (And unity.)

Glancing through it's Wikipedia page- which I know is a terrible way to get to know a country, but cut me a break, all right? It seems like Saint Lucia is your typical tropical island paradise: beaches, great weather, plenty of tourism, etc, etc, etc.

(*Tangent Time! The whole West Indies Federation was actually a thing! Much like what Central America tried to do back in the 19th Century, the West Indies tried to do in the middle of 20th. Didn't go so well, so they ended up splitting into nine separate countries instead. Why didn't it work? Well, Jamaica wasn't happy about the way things were going down and if Jamaica ain't happy, then nobody is happy, you know?)