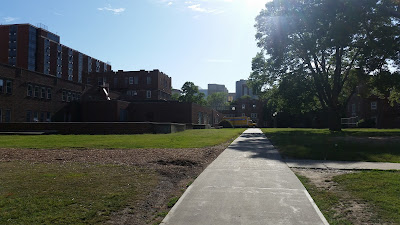 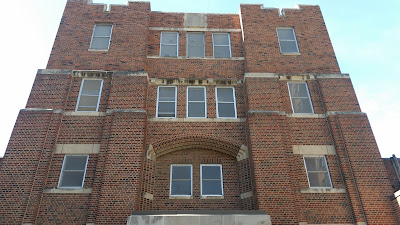 Little Dude was having a rough day last week, which the Missus and I thought meant that teeth were imminent, but no, he just really needed to poop and like us was probably tired of living in a sweatbox for a couple of nights. Needless to say, I planned some car trips to see if he would drop off to sleep- and both times he did, but on Trip #2 in the late afternoon, I swung through McDonald's to get a Happy Meal for Little Man (who had been a really good sport for the majority of the day) and then I realized that since Little Dude was still sleeping, I might as well swing up and take one last look at Quad.

I have no idea why I like Quad quite so much. I didn't even live there: I lived in Hillcrest. But in the year I spent working for the Security Division, I spent inordinate amounts of time walking the dorms and got to know them all very well- and Quad quickly became my favorite and everyone I tell this too thinks I'm either a. crazy b. stupid or c. just a little bit weird.

I understand why though: Quad was showing it's age and had been for quite some time. It was in dire need of an update- but the sense of history in the building was nice. The place had character- from that study lounge with the piano in one corner, to the Rehder Lounge (I think it was called) just off of the Main Lobby that had all those pictures from the construction of Kinnick Stadium from waaaaaaaaaaaaaay back in the day. The place had character and class.

I almost wished they would have restored the place to it's original glory and made it an actual Quadrangle again, but time marches on and the College of Pharmacy needs some extra room to expand. So, bye, Quad. I'd buy a brick, but I didn't actually live there and while you were my favorite dorm, you weren't $100 worth of a favorite dorm, you know?