This Week In Vexillology #155

February 27, 2016
This Week In Vexillology, we're heading back across the Atlantic and down the Caribbean to take a look at the other half of the island of Hispanola, with the flag of the Dominican Republic: 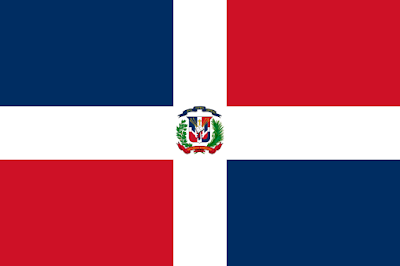 Adopted on November 6, 1844 for national and civil usage, the red and blue in the flag are taken from the flag of Haiti, which once controlled the Dominican Republic until it's independence in 1844. A movement known as La Trinitaria (it's kind of a weird historical parallel, but the three men that formed the movement to win the country of independence found their female counterparts in the Mirabal sisters, whose assassination by Trujillo galvanized opposition to his regime.)  was formed to free the country and succeeded in doing so- the white cross is the symbol of that independence movement. (The Coat of Arms I'll break down in a second- but it only appears on the flag for national and state usage- the regular, every day civil flag doesn't have them.)

After independence, the Dominican Republic had a rough go of it, briefly reverting to colonial status before finally securing it's independence in 1865 after another conflict. The 20th Century saw an eight year occupation by the United States and dictatorships which included Rafael Trujillo. (If you're interested in a fictional account of the latter days of the Trujillo regime, go find Mario Vargas Llosa's The Feast of the Goat and read it. Right now.) 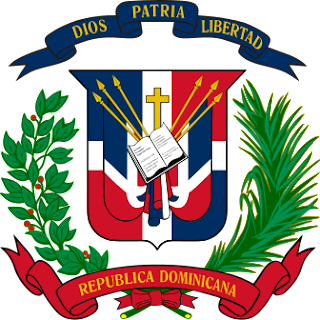 So, these are the coat of arms that appear on the flag. The motto on the blue scroll above the shield is the password of the independence movement. The red scroll below bears the name of the state. The shield is quarters in the colors of the flag with six spears, three on each side supporting the flag, The small gold cross and the open Bible (yes, that's supposed to be a Bible, opened to John 8:32) which bears the verse, 'Y la verdad os hara libre'  or, 'And the truth shall make you free.' A bay laurel branch appears on the left and a palm frond appears on the right.

And that's the flag of the Dominican Republic! Remember, until next time keep your flags flying, FREAK or otherwise!