February 08, 2016
Hey look, a new feature! This isn't a food blog, but I love to cook. There's sort of an inherent contradiction there that I've been wrestling with for awhile now as my blogging has never really fit into a solid category. I talk about politics, but this isn't a political blog. I review books and movies, but this isn't a review blog. And yeah, I cook too- but this isn't a food blog. When I moved back over to Blogger, I wanted to find a way to fuse some of the incoherence into something resembling an overall tone. Whether this works or not, I don't know- but for now, food, brewing, crafting (if I ever do any), landscaping and the like will find a home in Pinteresting. Hope you enjoy it.

Recently, I tried to make Taco Rolls and failed miserable at it- so when I found this recipe for Buffalo Chicken Garbage Bread over on Pinterest, I was intrigued. I knew where I had gone wrong with the Taco Rolls- too much meat, too little patience and the result was...  messy and not at all perfect and round like Pinterest said it should be. (Pinterest Fail!) And since I love all things buffalo chicken and we had extra pizza crusts taking up space in the fridge, I figured what the hell and gave it ago.  This is what I ended up with: 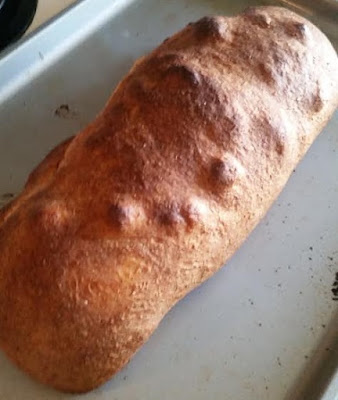 Ain't that pretty? Yes, it worked! It worked PERFECTLY. The recipe was as easy as promised- you cook the chicken, soak it some buffalo sauce (I used Frank's) and then just roll out your pizza dough, add some buffalo sauce, some ranch, chicken and cheese, roll it up and cook. I was a little concerned when I put it in the oven about oozing- but I guess I followed the instructions to tuck it up and under well enough to get a good seal on it. I'm also not sure whether the fact this pizza crust was a wheat crust had anything to do with it, but I got it out of the oven just in time as well- any longer and this sucker would have been on the wrong side of 'really brown' and heading toward burnt.

The results were a pleasant surprise.  Not only was this easy to make, but it sliced really well and it was simple and easy to eat- and it didn't even get that messy until you got to the center of the loaf and even then, it wasn't that bad (the chicken slipped out a little easier is all.)

Verdict: Pinterest WIN! And would totally make this again- this was easy and delicious- the best combination.

For the Super Bowl, I decided to try my hand at these:


I thought these looked amazing, so I figured why the heck not? I'm a fan of Kimchee, I'm a fan of pork belly and I'm a fan of nachos- so it seemed like a match made in heaven, but almost immediately, I had to deal with some curve balls. First: I couldn't find pork belly...  now, I suspect this might be because I didn't try hard enough, but Hy-Vee didn't have any, Lucky's had just run out, so I figured what the hell and got some cubed bacon ends instead.  Don't know if it was quite the same flavor, but it's bacon, so what the hell.  Second: I came up short on red pepper powder. I ended up using red pepper flakes, but I'm not sure if that's the same thing. (I have a sneaking suspicion that's a Korean Spice and not something you see in pizzerias all the time.) But I swung for the fences, cooked up my nachos and this is what I ended up with: 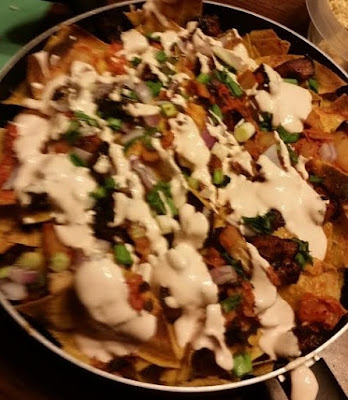 It wasn't quite as purty as the video, and- true confession- I forgot to put Kimchee on the first layer of the nachos, but people ate the overwhelming majority of these, so I must have done something right.

Verdict: I guess, Tasty (seriously, those damn videos are the worst things ever. They all look so good) for the win! I would for sure try these again- just to switch up the regular old nachos.