This Week In Vexillology #153 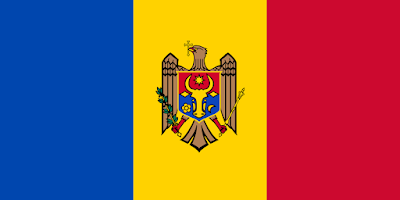 Well, this is weird. I get my handy-dandy reference guide out and you know what they have this listed under? Moldavia.  And yet, when you look this shit up on the internet, you find the flag of Moldova.

Hmm, so what's the difference? Well, it appears that the fo'shizzle country that exists today is, in fact, Moldova. The historical region that occupied roughly more of less the space space up until 1859 was called Moldavia. If you notice a similarity to the flag of Romania, that's not a coincidence- the two countries were unified at one point and share strong ties and affinities today.

So what's with the whole deal between Romania and Moldova? Well, it goes back aways to the 19th, where Moldavia, that old historical region was split up. The eastern part got folded into a shiny new Oblast of the Russian Empire- the Oblast of Moldavia and Bessarabia, while the western part joined with Wallachia to form the Kingdom of Romania. Now, after World War I and the Russian Revolution both parts of Moldavia switched sides and became Greater Romania. Looking at the handy-dandy map on Wikipedia, it seems like (if I'm reading it right) that Bessarabia then is what makes up most of Moldova today,  Either way, I think you could set relationship status to: It's Complicated and call it good. Give it a century or two and I'm sure everyone will be back under the same roof, so to speak, but for now, in our current historical epoch, Moldova is independent and has a pretty decent flag show off to visitors. (There's also the little matter of Transnistria, but we'll get to that next week.)

Their current flag was adopted on May 12, 1990 for national and civil usage and is a vertical tricolor with the arms of Moldova set in the center of the flag. The blue, yellow and red colors reflect Moldova's close ties to Romania. The coat of arms in the center break down like this: the eagle is holding an Orthodox Cross in its beak (again, another parallel with Romania) but while Romania's eagle holds a sword in it's claws, Moldova's holds an olive branch. The red and blue shield also departs from Romania- with an ox head, a crescent, a star and a rose- all traditional symbols of Moldova.

And that's pretty much the flag of Moldova! Remember, until next time, keep your flags flying- FREAK or otherwise!