Here's that Periscope Link to give you a notion of what my precinct was like just before the start of proceedings.  Busy, busy, busy, busy! (And I'm still sort of getting used to Periscope, so if I seem a bit unpolished, my apologies. I'll get better- oh and I also guess the links expire after awhile? So check it out while you can?)

Mobile blogging went well and looked good on my phone- but it turned into a gigantic block of text when I got on my computer, so I had to do some clean up.  In general, I'm super happy with tonight. TRUMP DID NOT WIN.  Rubio did MUCH better than expected and Bernie and Hillary are neck a neck for the Democrats.  Good job, Iowa.  I'm heading to bed- but will probably be lurking on Twitter for awhile.

9:25 PM: So, so relieved. Ted Cruz wins Iowa. I'm not really a fan of Cruz- to be honest, he seems like kind of a tool sometimes, but I'd rather tolerate a tool than be embarrassed by a xenophobic megalomaniac billionaire like Trump. WE MADE GOOD CHOICES AS A STATE. YAY! But, even worst news for Trump, Marco Rubio appeared in his rear view mirror, coming within 1% of shoving him into 3rd place. Fingers crossed this is enough for Rubio to vault ahead of the pack in New Hampshire and South Carolina- and hopefully some minnows will get out of the race. O'Malley and Huckabee are out. More to follow? I hope so.
Democrats are locked in a nailbiter... 1% separating Bernie and Hillary... not sure how that plays out yet.

7:16 PM: IT'S ON LIKE DONKEY KONG... living in between two caucus sites proved to be something of a pain in the ass when it came time to load up and come get the Missus from work as some ass hat in a VW SUV stuck his front end across a good chunk of our driveway but we got out. Another advantage of being a registered independent? Parking at UIHC has never been this easy.
Do I think we'll have a surprise or two? I think so... and undecided voters? Well I know of at least one in the Iowa Falls area who asked me for my two cents, so there will be some people making up their minds in the room so to speak.

I'll be posting a Periscope link in a bit to give people the idea of how busy our street is- and since I saw at least a dozen Republican voters running to SE Jr High after going to the wrong location, I just hope everyone checked their location first!!! Happy caucusing everyone!

5:36 PM: Well, we're getting closer to the appointed hour and I suppose its time to start talking about my personal hopes for the might ahead. This year, I'm not caucusing with either party. We were going to try and get me over to the Democrats so I could caucus for Bernie on behalf of the wife, who had to work today, but we couldn't swing a babysitter. (Yes, I know that Iowa has a law requiring employers to give employees three hours to go and caucus, but there's a health and public safety exception to that and she's a nurse, so she's s.o.l and kind of bummed about it.) It was tempting to go and vote anyone but Trump or Cruz with the GOPers but that whole train wreck has become increasingly dispiriting to watch and I just can't take it anymore.

But my real reason? I don't want to change my voter registration. I'm a registered independent, or as Iowa now calls it "no party" or "no party affiliation", which irks me because there are more than 2 parties out there and I'm not particularly enamored of either 'team' so why should I join? It's annoying but after inadvertently leaving myself registered as Republican after 2012 for far longer than I wanted too, I'm sticking to my independent guns this time around.

But, hopes and dreams: for the Democrats, oddly enough, I think they should #FeelTheBern and pick Bernie. I don't agree with everything he says, but he does say a lot of worthwhile things, so why not? Plus, I keep hearing whispers about an indictment for Hillary over this email business. It's probably wishful thinking and praying on the part of Conservatives, but the whispers are still out there and do you really want that blowing up your election? Everyone says Sanders has an electability problem, but from where I'm sitting, so does Hillary. So, pick your poison, I guess.

For the GOPers, it would be great to end this Trump lunacy once and for all, even if it as the cost of elevating Ted Cruz. The more likely hope is that Rubio vaults Cruz for 2nd and picks up momentum enough to clear some of the field and make a run at New Hampshire. Do I think either of those things will happen? No. I think it's all Trump all the time. Unfortunately.  We'll know soon enough.

2:47 PM: Well, it turns out that Precinct 6 aren't into yard signs as much as I thought. We didn't do a thorough top to bottom survey of every street and I didn't get across First Avenue to check out the few blocks over there, but it was about what you'd expect. Maybe 6 to 8 Bernie signs, no Hillary signs and the only GOPer to get a yard sign was Carly Fiorina- she only had two, but they couldn't be better placed at the corner of First Ave and Bradford.

I don't think you can place much faith in yard signs, but it's interesting to note them as sort of a barometer of the mood of people. In 2012, I think I remember seeing far more Romney signs, even in Iowa City than I expected. This time around, it's pretty obvious that Iowa City is feeling the Bern. And if yard signs are anything to go on, Bernie is gonna do great in Johnson County.Which again, is pretty much what you'd expect, right? In the People's Republic of Johnson County, the interesting contest is going to be between Bernie and Hillary and if Hillary is pulling decent numbers here, it probably doesn't bode well for Bernie elsewhere, as if any place is going to buck the establishment and be more progressive than usual, it's Iowa City.

On the Republican side, it's hard to tell. Ron Paul did well here in 2012 (that's why I partied down with the GOPers in '12, to vote for Paul and against Santorum). Surprises could be expected. Fiorina, for instance could do well here. But I also wouldn't be surprised to see Rubio do well either. Cruz pulled a decent crowd down at the fairgrounds last night, but I'm not sure how he'd play with the urban Republican crowd.
4 hours to go!!! (I'm also going to try and upload an image- so wish me luck!) 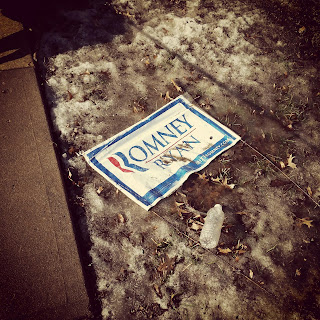 (Hey look, my image made it! This was a real yard sign seen along Wayne Avenue in Iowa City. Presumably, it's been there since 2012.)

12:10 PM: Well, now my plans for the day have been sidetracked by a sleeping baby, but we'll see if we can get moving here soon. Right now, we're on movie number 2 for the day, the truly excellent Paddington, but I'm going to get us out and about to check out Precinct 6 here in Iowa City and see if we can get a sense of the neighborhood.

7:53 AM: See, the thing I hate about the wife waking up to go in for day shift is that I can never get back to sleep when she's gone. Or I get hungry and can't get back to sleep. Or my pillows won't lay right. Either way, I'm not asleep. And I'd like to be.

5:55 AM: I'm going to be doing all (or the majority, at least) of today's live blogging on my phone and I have no idea what this is going to look like on a computer. For that, I apologize in advance. But it's early morning here in the Hawkeye State and the race for 2016 gets underway... tonight. A mere 13 hours or so from now.

Right now, though, I'm in bed. The Missus is heading out to work. The Little Dude has been satiated with some milk and The Little Man, who crawled into our bed at some point, has finally grasped the idea that there's a WHOLE half of the bed available to him and is sleeping again. Really, I should probably do the same (and will in a minute.)

No predictions from me yet, but I did see that the Hamburg Inn had released the results of their Coffee Bean Caucus: for the GOPers, Trump and Rand Paul were 1 and 2, respectively. For the Dems, no surprise at all, it was all Bernie over Hillary. (The Coffee Bean Caucus is, of course, totally scientific and waaaaaay accurate.)

Anyway, we're off. Look for updates periodically throughout the day and I'll really get going tonight.

What can you say about Tintin? He's been around for decades- was one of the most popular comics of the 20th Century. He's spawned a television cartoon (which I remember watching on Nickelodeon) and more recently a movie (two more of which are apparently coming, though it's been awhile since the movie dropped.)

Well, this was a bit of a milestone movie for us, as I took Little Man along for this one and you know what? He actually did pretty well... granted, there were multiple trips to the bathroom and I did buy an extra bag of popcorn to tide him over through the end of the movie- but overall, he liked it. He thought 'it was really long' but liked seeing Spiderman. (No idea where he's picked up Spiderman from, but of all the superheroes out there, he seems to mention Spiderman the most.) He liked it! So there's that...

Thankfully, potty trips didn't seem to deprive me of too many important plot points and the overall movie was incredible. In fact, of all the Marvel 'movie trilogies' there have been so far, Captain America probably ranks as my favorite (at least for now)* and they've saved the best for last and then some.

Nobody Knows Anything, So Buckle Up

May 07, 2020
I was going to do another listicle about ten things that I've been noticing in all this mess, but I've decided not too. I just can't anymore. It's emotionally draining on a good day and it's also because none of it actually matters, because finding the truth in a hurricane of shit is next to impossible. I'm sure, like Mulder and Scully in The X-Files that the truth is out there- but I've come to the conclusion that unless something changes- and there's an increasingly non-zero chance that something might change, then we're not just sailing into a post-industrial economy, we're sailing into a post-factual world.
Yes, everyone is entitled to their feelings and their own facts now. That's the world we live in. CBS News got caught faking a corona virus test line. The media is not structured to report on a pandemic where information is constantly being gathered, scientists learn more about this and waht works and what doesn't with every passin…
Read more