This Week In Vexillology #154

February 20, 2016
We're taking a bit of a detour this week in vexillology to take a peek at a couple of geographic oddities, which, like all geographical oddities, continue to fascinate me. (Parenthetical time! I've always had this weird thing about geographical oddities- places like Carter Lake,Iowa or the Kentucky Bend have always fascinated me and the flags we're going to look at this week fall squarely into that category.)

For our first flag, I'm going to drop a name you've probably never heard into your life: Transnistria...  if you've never heard of Transnistria or have no earthly idea where it is, well, you're probably not alone in that. One of those weird, post-Soviet conflict zones (along with Nagorno-Karabakh, Abkhazia and South Ossetia) Transnistria is a tiny strip of land between the River Dniester and the eastern border of Moldova with Ukraine. It broke away following a conflict in 1992 and has remained partially free ever since as Moldova has been unable to reestablish control over the region. (Cheerfully, after Crimea was readmitted (or stolen, depending on your point of view) into Russia, the President of Transnistria also asked to join back up, so this place might bubble up in the news in a semi-serious way at some point.)

As a whole, the place seems to be something of a mess as there are significant numbers of Transnistrians who are also Moldovan citizen, Russian citizens and Ukrainian citizens. (It's also got a delightful reputation as being very corrupt- a problem that Moldova also grapples with.)

So that's Transnistria. Now get a load of this flag: 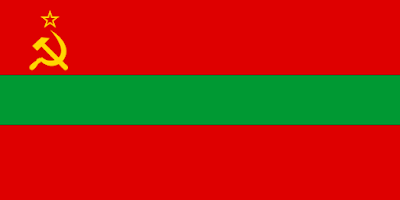 So, here's the weird thing about this flag. It's identical to the old flag of the Moldovan SSR. I guess after the collapse of the Soviet Union, Transnistrians didn't want to flag the new flag of Moldova and just kept right on using the old one. It remained so popular that it was officially adopted on July 15, 2000 as the flag of the breakaway region, but here's the kicker: Transnistria isn't a socialist state.

The next flag I want to take a look at this week is of the Russian exclave of Kaliningrad: 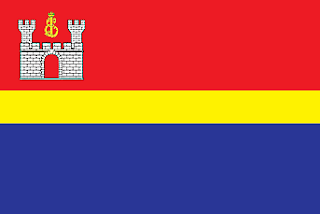 Sandwiched between Lithuania and Poland, Kaliningrad Oblast is that random piece of the Russian Federation that's just hanging out next to the Baltic Sea. (As I'm writing this, Google Maps is informing me that in the Oblast's Capital, the city of Kaliningrad, it's a balmy 30 degrees and about 2 AM. Which is kind of cool to know, in a way.) The exclave was taken by the Soviets in 1944 and they kept it after the end of World War II. They changed the name from Konigsberg to Kaliningrad (naming it after one of the original Bolsheviks, Mikhail Kalinin.) They folded it into the Soviet Union and tried to make it a part of Lithuania, but the Lithunaians said no. After the collapse of the Soviet Union there was a secret attempt to sell it back to Germany, but the Germans weren't interested so it stayed in the Russian Federation.

It's flag is pretty interesting- adopted on June 9th, 2006- before then, the exclave had no flag and even today, there's no official definition of what the colors of the flag stand for. The popular explanation is that the silver castle with open gates means hospitality, the dark blue is for the Baltic Sea, the yellow for the wealth of amber and red for (depending on who you talk too) either something called 'the active man principle', the Red Army, the 'bellicose past of Prussia', the Hanseatic League or some other historical connection with Poland or Brandenburg. (The monogram above the castle is that of Empress Elizabeth Petrovna, who was in charge during The Seven Years' War when Russia briefly controlled parts of the region.)

So there you have it- two unusual regions and their flags! Remember, until next time, keep your flags flying- FREAK or otherwise!