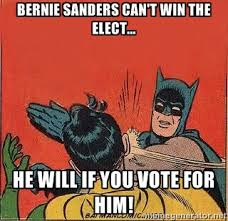 Pisses me the fuck off. I get tired, oh so very tired of telling people that no, I'm not going to drink the Kool-Aid of the hopelessly corrupt and morally bankrupt two party system.  I'm going to vote for a candidate whose policies and goals match my own beliefs and I could give three shits if they win or not. Yet as soon as Senator Sanders sells out and joins the Establishment he thinks he's going to burn to the ground with his legions of millennial fans, this meme is all up in my Facebook grill pissing me off.

Take Bernie's name out and put in Ralph Nader instead. Or Gary Johnson. Or Dr. Jill Stein (who was the only Presidential candidate to get fucking arrested for civil disobedience in 2012- not that any of you were paying attention. That's right, my candidate got arrested. What do you got?)  The same general idea applies to any 'third' party candidate you can name me. If enough people vote for them, they would win- but will people accept that if you substitute a non-sellout candidate that really isn't beholden to the establishment? No. I tell people I'm leaning toward voting for Gary Johnson and people either say 'who?' or say, "Why don't you want to vote for someone who can actually win?"

Ha! Like backing a 'winner' has done a damn thing for this country over the past two decades. My old economics teacher in high school didn't pound a lot of economics into my head, but he did say that elections in this country were like choosing between herpes and gonorrhea every four years and there hasn't been much evidence to indicate that he was wrong about that. (I suppose I should add that I did vote for President Obama in 2008 thinking that he would, perhaps, prove my old econ teacher wrong and he almost did.) But, still, every four years, people keep telling me, begging me to drink the Kool-Aid, to join their team, to put on the jersey and get out there and do some good.

And my response is still the same: fuck that noise.

I think- and I have thought for a very long time that in a country this size, we should be a vibrant, multi-party democracy that's governed by coalitions built on consensus and cooperation instead of by extremist ideologies (on both ends of the spectrum) that want to burn the other guy to the ground. But I've also got not one, but two very pretty degrees in Political Science and know darn well that that structure of our system isn't designed to handle multiple parties. First-past-the-post voting, single member districts in our legislature- it's designed to produce a low, manageable number of parties. If we're lucky, we might, someday evolve into a 2 1/2 party system (with a party like the LibDems in the UK were) or maybe develop regional parties (like Canada with the BQ or again, the UK with the SNP or PC). But if we want to have a real conversation (like Canada is) about making our democracy better, we need to be talking about things like ranked choice voting or proportional representation or multi-member district representation. Or if that doesn't appeal to the contrary, bullheaded stubborn streak that runs through our national DNA, then why can't we talk about devolution? Why can't we accept the premise that what New England should be allowed to do it's thing while the Midwest or the South does theirs? (It's also worth noting that in a democracy, we don't have to do any of these things. Just having the debate would be an incredible step forward in my book.)

After the last eight years, I don't know if I'll ever trust anyone running under the establishment banner again- even Bernie. If he had run as an independent, it might be different- but I don't see how you can reasonably expect me to believe he's going to change the establishment by joining it. That's like saying, 'oh, I completely wrecked my car, but if we get some really nice upholstery on it, it'll be just fine.' People want to believe candidates can fix the car and get it running again- which is understandable and I get where that hope comes from, I do- I've voted that way myself before- but, we need to face reality- the country needs to buy a new fucking car.

In 2012, I switched my voter registration to Republican so I could vote for Ron Paul (and more to the point against Rick Santorum, whose views I detest) and a few months ago, when I went to switch it back, I noticed that the old, trusty, 'Independent' option was gone (or might have never been there in Iowa at all- but damn it, it was there in Minnesota!). Instead, I had to register as NP or 'No Party Affiliation.' It still pisses me off and when I did some digging I found that around 2008 or so (I'm pretty sure the law was updated in 2011- but I've been wading through Legislative Language for a couple of days now to pin it down) Iowa changed some definitions around and mandated that in order to be considered a political party, parties needed to have a candidate for Governor or President receive at least 2% on the ballot- and they have to keep receiving hitting that number in order to keep their status. Other wise, they're considered a 'non-political party organization' or NPPO, which is a delightful amount of bullshit, as for example, the Greens and the Libertarians have party conventions, run candidates for President on a regular basis and in general, seem to be political parties by any reasonable definition- except for the State of Iowa's.

While my quest to discover why I'm forced to register as NP instead of Independent continues, I'm willing to bet it stems from this (and call me crazy, but it might have always been this way- my brain might be getting my wires crossed with Minnesota- but I swear I remember registering as an Independent in Iowa.) I noticed a money quote over on Deeth a few days back and it seems to confirm it:


(Tangent: No, it's no "Independent." The legal term in Iowa is No Party. I've never understood why people cherish that word "independent." Parties are a place you got to people and have fun.)

Gaaaaaah, the rage, the raaaaaaaaaaaaaaage...  of course we're not allowed to be 'Independent' in Iowa. That implies that we make up our own minds and don't march to the beat of anyone's drum, whereas No Party Affiliation gives the implication that we're the weirdo wallflowers at the Junior High Dance.

Well, I've got news for everyone. I've never been a 'joiner.' I've never been sold on the idea that I've got to choose one or the other- and that goes all the way back to 4th Grade when I proudly cast my vote for Ross Perot in our KidsVote election. (I did it again in 8th Grade too.) I still don't know who I'm voting for in this election, but I know it's going to be the person I agree with the most- even if that person isn't one of the motley crew of lunatics and dreamers running under an Establishment Ticket. If Iowa demands that I register as N.P.A. then I'll continue to embrace the label and so should everyone else.

(Damn, that would look good on a t-shirt, wouldn't it?)