The Saga of the Deck 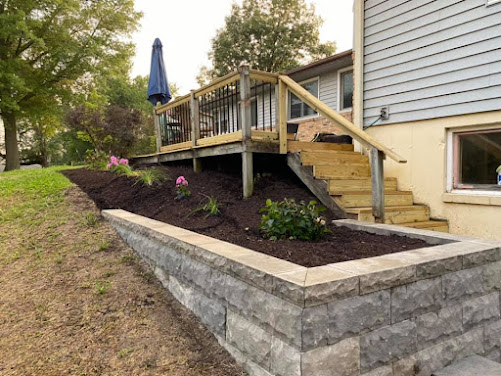 It's done.
It took over a year, but we managed to get it done- and got some extra- and needed- landscaping done as a bonus. How did it all begin?
Well, we needed a new deck. It had seen better days- and it had never been a focal point for the house even when I was growing up here. We hung out in the backyard and the deck out front was just kind of... there. A deck ignored is a deck that will, eventually, decay and it was in pretty bad shape when we pulled the trigger on getting it replaced. We figured we'd have someone check the supports to see how they looked and maybe we'll just replace some boards.
So, Contractor #1 came out. Gave us an estimate. Took a payment. Showed up for one day of demo and then... vanished. What should have been a three-day job turned into months of text messages and phone-tag which culminated in us threatening to file in small claims court just to get a refund. We got our money back and found Contractor #2.
He seemed like a genial enough fellow. Took some measurements. Gave us an estimate. Never saw nor heard from him again.
The third time was apparently the charm because we found a deck guy (Contractor #3) who was super responsive, straightforward, and specialized in deck and delivered us an excellent, beautiful deck.
FINALLY.
The landscaping was sort of a bonus. I'm not sure if it was because of age, whether it was time or winter without a deck providing some bare form of erosion control had just exacerbated things, but the stone framing around those stairs used to be wood. It was starting to bow out and was beyond our ability to do and to do it well. So we got the landscaping folks in to build an actual retaining wall and redo all that stuff (Contractor #4) and now our front yard looks amazing.
So, four contractors and over a year later, The Saga of the Deck is finally over.