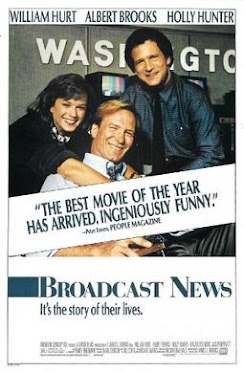 jobs we have, so a well-crafted portrait of how people interact at work and out of work always seems to drag me in and entertain me- especially ones about the news business. No one probably remembers Morning Glory, but I freaking loved that film. I don't think anyone would say that The Newsroom is Aaron Sorkin's best work, but I'll watch that over and over again- though admittedly not as much as The West Wing or Sports Night. But, one film that has lurked in the background of all of this has been Broadcast News.

It's the story of three journalists: Jane Craig (Holly Hunter), Aaron Altman (Albert Brooks), and Tom Grunick (William Hurt). We get a glimpse of their childhoods at the beginning of the movie- Jane is obsessive, bookish, and loves words and writing. Tom works hard, but can't quite get there and Altman has a massive chip on his shoulder and something of an inferiority complex. These childhoods are all reflected in the adults they become.

Jane is a news producer, who is obsessed with work, loves reporting, and hates the trend towards soft news is broadcasts. (This was made in 1987, so boy oh boy can its world of journalism seem a wee bit quaint here and there.) Aaron is a gifted writer and reporter, desperate to get on-camera exposure and secretly in love with Jane. They both work in the D.C. bureau of a national TV network that hires Tom- a local anchor who got his start in sports. He's tall, handsome, telegenic- pretty much made for television, but lacks general knowledge and reporting experience. He's constantly seeking help from Jane on his reporting and she resents him for it- but the two find themselves attracted to each other.

Aaron and Jane go on assignment to Nicaragua to report on the Sandanista rebels and get caught in a firefight- they remain unscathed and their report wins the approval of their national anchor, Bill Rorish (Jack Nicholson). At an office party, news arrives of a Libyan attack on a US Airbase in Italy and the network president decides to make a special report about it- with Tom as lead anchor. Aaron goes home to be morose and drink. Jane guides Tom through the newscast-- her skills and his telegenic presence making for a great success. Aaron lends some pertinent information as well.

Tom wants to do something by himself, without assistance, and makes a decent piece about date rape- it's affecting- though both Aaron and Jane are unimpressed. The trio learns of potential layoffs coming- and Aaron, eager for a chance at on-camera, offers to lead the weekend anchor slot while everyone goes to the correspondent's dinner. His copy is excellent, he seeks out Tom's advice- but it's ultimately a disaster- as he sweats. A lot.

Jane, learning of this disaster leaves Tom at the dinner to go and console Aaron- and they end up having a fight about Aaron's ulterior motives and his dislike for Tom. Aaron points out that Tom represents everything Jane hates about the news.

The layoffs arrive. Tom goes to London- he's being groomed for the national anchor slot. Jane becomes bureau chief. Tom and Jane agree to a romantic getaway- and Aaron resigns, taking a local news job in Portland, Oregon- before he leaves though, he points out to Jane that Tom's tears in the date rape piece were staged. Jane watches the footage and realizes he's correct- meeting Tom at the airport, she refuses to become involved with him because of his breach of journalistic ethics. (Again, how quaint in today's media landscape!)

They all meet up again and catch up seven years later. Tom is a national anchorman. Aaron is married and has a kid. Jane has a boyfriend. Tom invites Jane to dinner with his fiancee, but she declines and she and Aaron sit and catch up on their lives.

Overall: It does seem a little dated compared to today's media landscape, but the cast is fantastic and James L. Brooks-- I seem to recall his movies involve well-rounded characters interacting with each other quite a bit and there's no departure from that here. It's all about Tom, Jane, and Aaron and who they are as people. Jane randomly cries sometimes- and we never find out why, so that was a little strange. But I do like that none of them end up together-- I think that's really reflective of how life often works and it's not a nice neat ending all tied up in a bow. Part of me wishes we had seen more of the actual business of news and broadcasting, but even with what we do get, it's ultimately a good movie. My Grade: *** out of ****