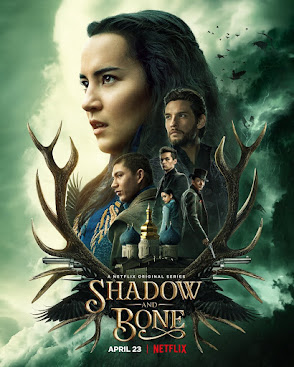 Shadow & Bone: I've never read the books, but it popped up on Netflix, there was some nice buzz about it, so I thought, why not? Turns out it was a pretty good decision in the end. In Ravka, there are people known as Grisha, who can practice what they call "small science" but it's pretty much magic. They're trained by the Second Army. Ravka is a country split in two by what's called the Shadow Fold- a region of impenetrable darkness, created hundreds of years ago and inhabited by monsters called Volcra. Ravka's been at war ever since- and might be on the verge of Civil War with the western half (where we start the series) believed to be wanting to seek independence.

The one person who people believe can destroy the Shadow Fold? A sun summoner- and, as it turns out, our hero, Alin Starkov (Jessie Mei Li) turns out to be such a Grisha. Once this is discovered, she's torn away from her life as a cartographer in the First Army, separated from her best friend, Mal (Archie Renaux) and taken to General Kirigan (Ben Barnes) who sweeps her away to the Royal Palace to learn more about her powers and to train to hopefully destroy the Shadow Fold and reunite Ravka. But with her emergency, everyone understands how powerful she is and other forces gather around her. Kaz Brekker (Freddy Carter), the leader of the Crows is sent from Ketterdamn to kidnap her along with Inej (Amita Suman) and Jesper (Kit Young.) Fjerdan witch hunters are dispatched to kill her. (Fjerda being the rough equivalent to Finland/Lapland in this world). And the people, in general, venerate her as a Saint.

It would be a lot for anyone to get used to but it turns out General Kirigan isn't who he appears to be and has an agenda of his own...

I was curious about this one and there's a lot to like about it. The Eastern European/Russian/Norse kind of feel to the world is pretty unusual for fantasy. I mean, it's still fairly Eurocentric, but it's not the "Wars of the Roses" in England type of milieu (Game of Thrones) and it's got a palpably different feel than more Western European centric fantasy. So I liked that. It felt fresh.

I did see some Twitter-versy about the discrimination that Alina faces being part "Shu" (I'm guessing the analog for China in this world). To be honest, it didn't particularly bother me, but the more I think about it, the less necessary it felt. There are a few people who make shitty remarks about her heritage. No one else does. There doesn't seem to be a systemic prejudice against Shu in the world. The country doesn't really figure into the story the way Fjerda and its culture do. I could maybe understand making that choice if the Shu were the big, bad enemy nation- but really, they're not. It's more Fjerda and internal splits within Ravka itself that take center stage. So yes, I would come down on the side of: "why was it necessary." It didn't seem to feature heavily in Alina's character arc- the fact that she was an orphan was more salient. And if it's not a key part of the story or the character, then why bother shoe-horning it in there?

The other thing that bothered me: General Kirigan. Not his character's ultimate goals or aims- those I'm fine with, but with the frankly creepy quasi-romance he attempts with Alina. It fell flat. There was no chemistry and it didn't even make sense with the overall plot-- I think if you were going to go that way, you needed a different actor or at least a different approach to the role. But as it is, it fell flat and came across as more than a little creepy. I was not a fan.

Overall: It's a little uneven but ends its first season with room to develop. It's also a fresh enough take on the fantasy genre that it doesn't feel like it's trying to be Game of Thrones- I expect we'll be seeing a few more seasons of this one. And, you know what? I'll watch. My Grade: *** out of ****

Chernobyl: This was the miniseries that really made me want to get HBO Max- or at least a free trial of it- when it first came out-and once we took the plunge on HBO Max it was one of the first series I binged. It is as good as you would expect and more. Before it flashes back to the night of the accident, we see Valery Legasov (Jared Harris), alone in his apartment, recording his memoirs. He goes out to take the garbage out hides the tapes in a hidey-hole, then goes back into his apartment and hangs himself. (You find out later that those tapes he hid get smuggled around the Soviet scientific community and eventually force the government to fix all the other reactors that had the same design flaws that Chernobyl had.)

Then, they flashback to the moment of the accident. Deputy Chief Engineer Dyatlov (Paul Ritter) dismisses the severity of the explosion, despite the fact that the core is now exposed. Emergency services rush in, responding to a fire and not realizing what has happened either. The viewer is immediately thrust into this sense of impending doom-- you watch the firefighters, just thinking they're fighting a fire, not realizing the debris is actually bits of the core- and you know most of those guys are going to die.

That's really what hangs over the early episodes of Chernobyl. Impending doom. There's the physical doom- the inhabitants are exposed and have no idea. The firefighters and plant workers- some of them take lethal doses of radiation. But there's also the doom of a government that refuses to believe what's happened. So many bad decisions- and while there are some liberties taken from a historical point of view- the overall story arc I think it pretty faithful to the actual narrative. Some characters like Ilana Khomyuk (Emily Watson) are composite characters- in her case, one based on multiple scientists who investigated the accident.

But really, as the series moves towards a conclusion. (A ludicrous, but apparently more or less true part that blew my mind: clearing the roof of the reactor building. A police robot and a moon lander were repurposed to do the job, both failed due to high reactivity, so they assembled a crazy number of people who each had thirty seconds to grab a shovel full of crap and shove it over the side. They just rotated them all through.) Truth becomes the central theme of the series and it's Legasov's final testimony before Dyatlov's trial that brings the series to a perfect climax- because, as it turns out, the state is not interested in the truth. His testimony is repressed. Credit for his efforts is given to other people and that winds us back around to his apartment and the tape recorder. The series then closes with the fates of several people of the Chernobyl disaster and the show is dedicated to their bravery and sacrifice.

Historically speaking, it's come in for a decent amount of criticism- especially from Russian and Ukrainian sources. Hollywood will be Hollywood, so you kind of have to expect a certain amount of that and I'm sure some points of criticism are fair and I think pointing out that after it became clear that the accident couldn't be covered up, the Soviet Government accepted help.

Overall: even if it takes liberties here and there, Chernobyl is a gripping, well-written mini-series with an excellent cast and is worth your time. My Grade: **** out of ****