I've decided that Brandon Sanderson is an evil genius of some kind. Basically, his m.o. goes like this: 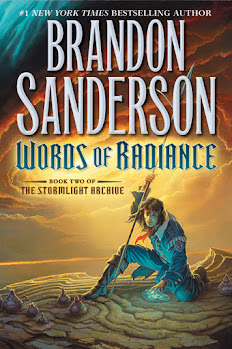 1. Write the doorstop of an epic fantasy novel.

2. Seed your plot with just enough hints of what's to come through the first 75% of it.

3. Just as your reader is bored out of their minds and waiting for something, anything to happen, have all the seeds sprout at more or less the same time.

I'm only two books into The Stormlight Archive and I feel like that's going to be the basic formula going forward and I don't know if I have it in me. I might have to take a little hiatus to go and read other things. It's not as if I dislike the characters in The Stormlight Archive- in fact, given the choice between this series and Mistborn, I'll stick with the former over the latter. But it just takes so god damn long for anything to happen.

Probably the most interesting character in this book is probably Shallan. Traveling with Jasnah to the Shattered Plains, their ship is attacked and Jasnah believed dead- and it's up to her to get herself to their original destination, ingratiate herself with Dalinar Kholin and his family- especially since Jasnah has set up a betrothal to Dalinar's son, Adolin and work on revealing the truth to the world: the Parshendi are the Voidbringers of old. In general, her chapters and character development are the most interesting and engaging parts of this book- and she ends up proving critical in the climax of this one.

Two more characters I'm intrigued by: Szeth and Eshonai... if there's one thing that Sanderson does very well (apart from his evil genius routine described above) I think it's not making anybody particularly one-dimensional. Eshonai and the Parshendi have stumbled across this new form that could turn the tide of war in their favor-  Eshonai assumes the "storm form" and is fighting some ambivalence about it for the entire book (internal screaming, etc). Not all the Parshendi are okay with this. Same with Szeth and Taravingian and that crew- we still don't know their full story at this point either, but it seems like they're trying to "save the world" and "prevent the desolation" as well.

Kaladin is grumpy, mopey, and heads back into his dark and twisty depression for a good two-thirds of the book- he's fairly boring to be quite honest, but rallies quite nicely at the end. Here's the kicker though: I just want him to move forward as a character. I'm really hoping that the events of this book have changed him for good. I'm thinking they probably have, but two volumes into a planned ten volumes, you never know. I'd just hate to see his character go back to where he was at in the first book and for an annoyingly large portion of this book.

What did I like overall? Plot developments-- like I said above, Sanderson liberally scatters plot seeds throughout the book, and then they all sprout at once at the end, to the point where you're racing through the last third of the book because you find it genuinely interesting again and can't wait to see what happens next. The most interesting twitch of the curtain: the antagonists seem to be operating on much the same page as our protagonists: they want to save the world, they just appear to have a very different vision on how to accomplish that task. It's another shade of grey that may well be a red herring/fake-out in general, I think epic fantasy is going to end up with a Tolkein-esque confrontation between good and evil- it's just a question of how you frame it and how you get there.

Overall: A strong second volume and a worth successor to The Way of Kings, Words of Radiance develops some characters and builds the world of Roshar and the coming conflict that I'm assuming will dominate the next (planned) eight volumes of the series. Whether I make it through the rest of these doorstops remains to be seen, but for my, My Grade: **** out of ****