The theatrical cut of Justice League was okay... I thought it and Batman vs Superman Dawn of Justice 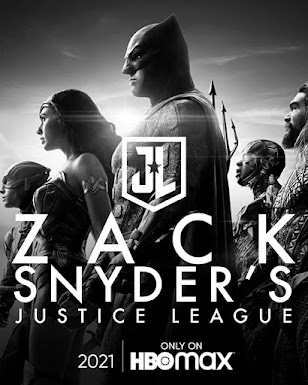 both suffered from the same odd problem: the characters were incredibly interesting. The plot of the movie wasn't really all that interesting at all. So, I was curious when The Snyder Cut was announced. Could this movie be made... better?

It turns out that the answer is, strangely, yes, it was better. It was also four hours long which a viewer could be forgiven for being a little scared of- but unlike say, The Irishman (another long movie) the Snyder Cut is long, but it doesn't feel long and ultimately, I think what results is a more complete movie that makes me care about more characters and the story itself. So in that sense: mission accomplished.

I don't want to re-hash the plot of the movie again. (If you want that, here's my review of the Theatrical Cut) but let's instead take a dive into the aspects that worked really well:

First, Cyborg. Biggest difference between Theatrical and Snyder Cut is that in the latter, Cyborg (Ray Fisher) is given a fully realized backstory and a ton of stuff to do. (In fact, he proves pivotal in splitting the mother boxes apart.) Ray Fisher makes the most of the role- and I don't know how much of his expanded role was new and how much was left on the cutting room floor, but either way, Cyborg's story didn't feel rushed. It didn't feel shoe-horned into a movie more concerned with getting to the big showdown with the big bad guy.

Second, The Flash. I don't think Barry Allen (Ezra Miller) is given as much to do as Cyborg in the Synder Cut, but his story as well feels fully realized here. We get to see him meet Iris West for the first time in a great sequence as he's applying for a job in a pet store. We get hints at his backstory and why his Dad is in prison and tantalizing hints of Flashpoint, the speed force and him getting a job at the crime lab in Central City all happen here. The result is that he feels like a more complete member of the team as well.

Third, the pacing. Being four hours long, there's really no need to rush your story along and the movie is better for it. It's well-paced- with Steppenwolf finding Mother Boxes at a more natural pace and the Justice League coming together before figuring out that the need to resurrect Superman. As a result, it doesn't feel like there's a mad rush towards the epic showdown-- instead, the showdown feels earned and all the more epic because of it.

Fourth, Martian Manhunter! He doesn't show up that much in the movie- and certainly, the first time he shows up, it's a 'blink and you'll miss it' type of a moment and he doesn't properly introduce himself until the very end, but it's super cool that he does show up-and hopefully, we'll see more of him. (There's also tantalizing hints of the Green Lantern Corps as well, even though we do only see one of them at the very beginning.)

I don't know if this represents Snyder's last involvement in the DC Movieverse, but if it does, it's one hell of an achievement and one hell of a swan song. Not to be merely satisfied with making a movie that fit his artistic vision, he sows hints and seeds of what he had in mind for subsequent movies- including some kind of a dystopian future where Lois Lane is dead and Batman has teamed up with The Joker and many others to take down a now villainous Superman. So many possibilities and so much potential is laid out in this movie! We'll have to see if DC brings him back and makes something happen with it.

Overall: Yes, it's four hours, but it doesn't feel four hours and that's pretty damn impressive. It also manages to massively improve on the theatrical cut of Justice League and make it a much better, more complete movie. My Grade: **** out of ****