I have no idea why I downloaded this book. I think I had some free credits on Audible and after picking 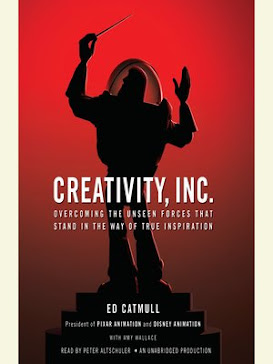 up Extreme Ownership, I saw this and I think thought it may be about the business of creativity and how better to market your creativity? Maybe? But I couldn't have been more wrong.

What this book was about is Pixar. Written by Pixar co-founder Ed Catmul and Amy Wallace (narrated by Peter Altschuller), Creativity Inc, is the story of the development of computer animation and the eventual founding of Pixar and how it grew and developed the creative culture that has brought it so much sustained success today. The early chapters of the book focus on Catmul's childhood love of early Disney animation and his desire to become a feature film animator-- by the time he made it to college, however, he ended up with a degree in physics and computer science from the University of Utah and encountered Ivan Sutherland who changed his interst to digital imaging and then set his sights on making a computer animated film- as early as 1970. (An animation of his left hand was incorporated into the 1976 movie Futureworld- which I guess is the sequel to the Westworld movie made back in the 70s?)

From Utah, Catmul went to work for the New York Institute of Technology, developing the technology to advance his goals of computer animation- but they realized that while they were getting closer and closer to getting the technology right- they lacked the ability to really tell a story via film- and couldn't get any interesting or help from multiple studios in that regard until they went to work for Lucasfilm.

(Two fascinating asides here: one is that Disney wanted absolutely nothing to do with the idea of computer animation at this point-- even as the studio was in a post-Walt Disney slump that really wouldn't get reversed until the early 90s. The second was that- although it shouldn't surprise me in retrospect- Pixar essentially started life as the computer graphics division at Industrial Light and Magic, which was George Lucas' effects shop that emerged from Star Wars.)

Lucas sold the computer graphics division in 1986 to Steve Jobs and then Pixar was born. (Far earlier than I thought Pixar had been founded) and eventually they formed a partnership with Disney that lead to them developing Toy Story and all the Pixar movies we're all quite familiar with today- and while the story of the company is interesting in and of itself-- it's fascinating to learn just how early people were thinking about computer animation-- where the book gets really interesting is delving down into the creative process that made Pixar into what is it today.

Notes and feedback seem to be extensive. The movies that Catmul describes in development are tantalizingly different from what we ended up seeing on the big screen in the end. (For instance, Bolt had a subplot involving a serial killer? Which seems crazy to me-- and thankfully, crazy to the people making the movie in the end-- but there's lots of little tidbits like that for just about every movie you can think of.) Directors and creators learn to refine their pitches with feedback from a large brain trust and in the end, that makes for a better movie overall.

Research also seems to be key to the success story too. For The Princess and the Frog (technically hand-drawn, but made post-merger between Disney and Pixar and thus under the same umberella of their creative culture), they sent the animators to New Orleans. For Up! they actually went and saw some of the mountain environments that feature in the film. Ditto for Ratatouille.

There's other things too: Catmul and eventually John Lasseter encouraged a culture of problem solving regardless of perceived management 'chains of command' they wanted an open door policy that meant that they were aware of problems in the company and employee unhappiness before any problems could fester. They looked for innovative ways to foster creativity- like designated time for engineers, artists and designers to pursue their own projects. They also placed a premium on employee happiness- which in a fascinating turn on events saved their collective bacon on Toy Story 2, I believe it was- when a new Mom employee had been doing remote work on the movie at home and had backed up a ton of critical files that they needed following an accidental deletion of most of the movie.

Overall: This was not the book that I was expecting at all, but I'm glad I found it and it turned out to be a fascinating listen and an even more fascinating story about one of the most prominent forces for creativity in our culture today. My Grade: **** out of ****