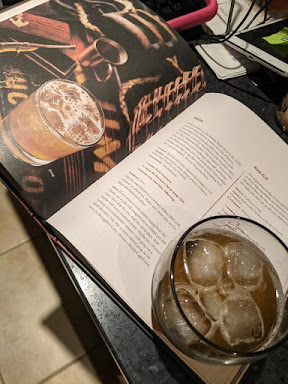 The name 'Grog' doesn't exactly bring a lot of appeal to the table. It lacks that exotic tinge. It puts one in mind of a pirate ship and not necessarily one crewed by Johnny Depp and all his merry rogues from the Pirates of the Caribbean movies. How did grog come to be?
Well, sailors back in the day required a great deal of fresh water on voyages because desalinating sea water wasn't practical- so they had to keep it in casks. The casks would develop algae and get slimy so they started flavoring with beer or wine to make it palatable and that required more storage and soon fresh water along with the beer and wine to flavor it up a bit meant that they were having storage problems, especially on longer voyages. Happily, when the English conquered Jamaica in 1655, they soon found rum and rum began replacing beer and brandy as the drink of choice.
Naturally, giving your sailors straight rum caused other problems to crop up and soon, British Vice Admiral Edward Vernon, who wore a coat of grogham cloth and was nicknamed Old Grogram or Old Grog touched upon a solution of mixing the rum ration with water- thus, the basic form of grog was born. Gradully, to deal with things like scurvy, lemon juice and sugar was introduced to it- which after sme conflict or another became lime juice and sugar. and so, we arrive at our basic recipe:

I love the simplicity of it. There's so many tiki drinks out there that require syrups and purees and exotic liquor that I can't find on my store shelves, and then occasionally you find drinks like this. Three ingredients- and yes, actually tracking down real demerara sugar does make a difference, but if you don't want to do that, brown sugar will do just as well- change the shade and you change the flavors- which is another fascinating aspect of all this. You'd think that sugar syrup is just that- sugar and water, but different kinds of sugar can have a surprisingly strong influence on the overall taste of your cocktail.
Naturally, Smuggler's Cove contains multiple variations on Grog- including the Navy grog, which apparently Richard Nixon liked to pound late at night. There's the Captain's Grog. Smuggler's Cove has a version in the book as well. It's everywhere, but there's something about this simple, basic version that just can't be beat. My Grade: 9/10 would absolutely drink again.
*Smuggler's Cove added a note to their recipe as well that's worth quoting in full: "If you want to truly mimic a grog from the 1700s, use a pot still unaged rum or a black pot still rum. (And skip the ice. And the clean glass. And maybe add some brackish water. Maybe not.) If you're looking for a nineteenth-century-style grog, try a black blended rum. For a more refined grog, as we serve at Smuggler's Cove, choose a blended aged rum.