November 02, 2020
In these times of quarantine, we often search for the literary equivalent of comfort food- hence I've been 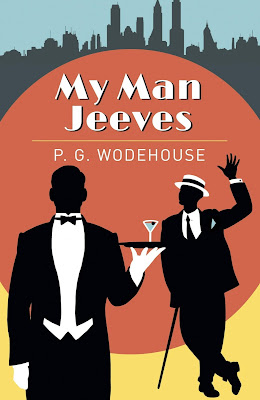 re-reading and re-visiting many old favorites of late, but also, we look for things to bring us some amount of joy or even a chuckle or two. When I came across an article extolling the comedic writing of P.G. Wodehouse- of whom I had heard, but never actually read- I decided to give one of his books a go and where better to begin than with the very first volume published over a century ago now, My Man Jeeves.
I know there are novels later on in the Jeeves and Wooster series, but this collection of short stories feels about perfect. Wooster gets into some kind of predicament. Jeeves inevitably solves it. Witticisms, similies and metaphors dryer than sherry abound. All in all, it's charming-- (I really need to revisit John Kennedy Toole's A Confederacy of Dunces-- which is widely hailed as the Great American Comic Novel, but lamentable didn't draw too many chuckles from me on the first attempt. Wodehouse lived up to his billing and did have me chuckling, however.)
There are eight total stories in this collection-- about half feature Jeeves and Wooster and the other half feature an early prototype for Wooster named Reggie Pepper- which was a little confusing when both Jeeves and Wooster sort of disappear halfway through the book, but I rolled with it- and it's not as if the book suffered with the inclusion of the Pepper stories, quite to the contrary. I'd say the Pepper stories are probably the funniest of the collection-- ranging from "Helping Freddie' to "Doing Clarence A Bit Of Good" (which have nice, farcical elements that are very British) and then there's "Absent Treatment" which had a nice punchline to the story I didn't expect.
As for Jeeves and Wooster, it's a pretty simple formula for them: Wooster marvels at how Jeeves solves all his problems the way he does and Jeeves, for his part, always ends up knowing best. You would really have to get deep in the Marxist weeds to produce a class critique of the pair, because at the end of the day, Wooster is an upper class buffoon and Jeeves is the working man who keeps Wooster's shit straight-- without the buffoonery and outright idiocy of Wooster, I think it'd feel weird, but because Wodehouse makes Wooster such an idiot, it serves to lampoon the layabouts of the upper crust even while we marvel at the misadventures.
I wish I could say there was on specific metaphor or similie that stood out for me, but there's not- I think there are just too many to choose from. It's rather the way that Wodehouse just sort of pitches them in there. It's like watching a baseball game. It's generally enjoyable overall, but occasionally, there will be doubles, triples and home runs when you least expect them and that's really Wodehouse's comedic rhythm I think. There's not really build up in the traditional sense you expect from sitcoms, he just sends his bon-mots and witticisms in over the plate and occasionally some get hit out of the park.
(That was a rather meandering metaphor even for a book review- but you get the idea-- right?)
I thought Hulu had the television adaptation of Jeeves and Wooster floating around, but alas, I had to go digging on YouTube where there are full episoes featuring the perfect casting of a very young and dashing Hugh Laurie and Steven Fry. I watched about half of the first episode before deciding that I had to finish the book before watching anymore. I'll have to go back and do that.
Overall: In general, if someone tells me that they're an excellent comedic writer, they better be able to get a chuckle or two out of me and Wodehouse did all that and then some. Excellent writing. Great stories. I think more Wodehouse will have to be in order.  My Grade: **** out of ****