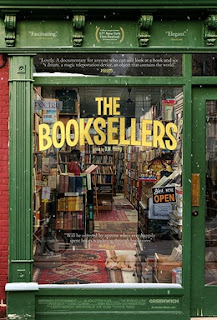 people who collect them. As someone who loves books, it's kind of like catnip. You're not going to get me to say no to watching a documentary about books. It focuses mainly on booksellers in New Your City- including the three sisters (Adina cohen, Naomi Hample and Judith Lowry) of the Argosy Bookstore, Stephen Massey who founded Christie's NY Book Department and Nancy Bass Wyden, owner of the Strand Bookstore.

It's fascinating to explore the history of the rare book world- how some of these book stores got started and how they touch on the founding of the Book Department in Christie's is all fascinating stuff. You take the basic history and combine it with a lot of female book collectors/dealers who are out there who had to overcome the sort of stultified, conservative (dare I say, stuffy?) nature of the business to break in and broaden it's horizons and there's a compelling story to tell here. People seem to finding now that it's not just collection of books that are the way to go- it's collecting certain kinds of books that seems to be the smart thing these days. (There's an African-American book dealer they talk too who collects African-American writers/artists/ephemera and another one- I want to say it was Susan Orlean, who collects books/artists/ephemera by women.) Worry at the future of the business wars with the young up and coming members of the business who are ready to be the next generation of rare book sellers- the owners of the independent bookstore they talk too mention the struggle against Amazon in this regard as well. (The Strand recently sent out a bat signal for help on Twitter-- their website is here if you're so inclined or need somewhere to shop.)

The other side of the coin of this documentary is what gave me pause: some of the collections featured as so ludicrous and so enormous, it's hard to see the point of them. Spending a day wandering around a warehouse full of old books seems like my idea of a good time. Having and spending the money to get enough books to fill a warehouse? Eh. I'm never going to judge what other people collect- but I would want to value the book as a book- you get so many at a certain point it becomes just a thing. And I love books too much to ever want to see them as a thing. (Some of these collections though... *swoon*... there's some dude they interview who has a library of imagination that's designed to look like an Escher painting, staircases and all.)

My Grade: A delightful documentary that is a must for any bibliophile! **** out of ****

Sour Grapes is also about collectors- though this time, it focuses on the ludicrous world of wine 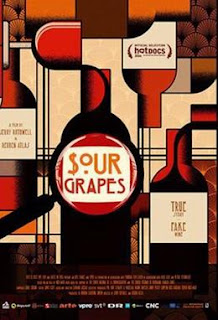 collecting. Right out of the gate, it's really hard for me to feel sorry for any of the people in this movie. I am very much of the opinion that while vintage port is worth sitting on for awhile-- wine and even eventually that vitnage port is made for drinking. If you're rich enough to have a cellar just for wine- and more importantly, if you have that cellar absolutely full of wine, you need to entertain more. You need to drink more-- which isn't something your doctor would probably reccommend for health reasons, but at the end of the day- much like the books in The Booksellers- all that wine? You can't take it with you. So why not enjoy it while you're here?

Okay, soap box put away, let's get onto the point of the documentary. The story of Rudy Kurniawan, a rich Indonesian wine collector- who had a fascination for Burgandy and spent millions on acquiring and told just as many bottles of wine-- the auction company Acker Merrall & Condit sold $35 million worth of Rudy's wine in 2006 which was a record at the time for wine sales. In 2008, they held another sale and promised that the wines would authenticated by 'some of Burgandy's most discerning connoisseurs" including bottles of Domaine Ponsont Clos Saint-Denis from 1945, 1949 and 1962. Which interested the proprietor of the estate, Laurent Ponsot greatly as they didn't start producing until 1982.

Turns out the world of expensive and vintage wine collection- which is a pretty lucrative market, there's also another problem: fake and fraudulent wines. Ponsot, obviously, wasn't exactly that happy about someone so brazenly making fake bottles of his estate's wine, so started investigating. And that started other people investigating this as well and the more they learned about Rudy Kurniawan, the deeper the rabbit hole got and it lead to an FBI raid on his house in Los Angeles and what did they find? Turns out Rudy collected empty bottles and refilled them with cheaper wine and then forged the labels. It was a massive, bigger than expected case of WINE FRAUD and in 2014, he became the first person in the United States to be convincted of the crime and was sentenced to ten years in prison. (Perhaps unsurprisingly, he declined to be interviewed for the documentary.)

The revelation of what Rudy had been doing all along is really what takes this documentary to another level. He was using a funnel and doing most of this stuff in like his kitchen- and we're talking millions of dollars of fraud. I guess if you're doing something you don't expect to get in trouble for- you probably won't take all that much effort to hide it. I think what surprises me most in the end is that some people think he's a crook and don't want to have anything to do with him, but some of these rich people seem ready to forgive him, because he was always a fun guy to hang out with.

My Grade: Fascinating twist at the end and fascinating that people will fake vintage wines, but there's a lot of 'rich people problems' and 'first world problems' that makes it hard for the viewer to really connect with this documentary. ** out of ****