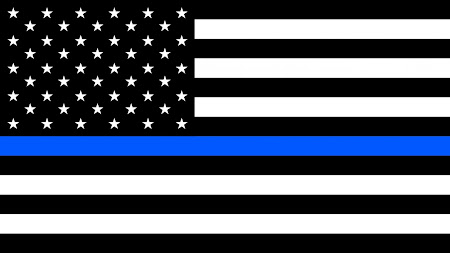 I'm not a cop, I just get paid to tell them where to go, but I have spent a decade now working alongside cops and fall into the category of 'law enforcement adjacent.' Looking at the current climate, it's easy to wonder if this job is really worth it sometimes, but just when I start to wonder about that, usually, I'll get a phone call and get to help someone. Help for my job can mean the smallest thing like giving someone directions or processing a vehicle unlock or it can mean handling a medical call for anything ranging from a broken ankle to chest pains and difficulty breathing.

Helping people is the core of what I do and it's honestly why I like this job.

I'll be honest, this was going to be a much different post before the election. Every Trump rally leading up to Election Day inevitably featured a gigantic Thin Blue Line Flag hanging from a pole somewhere and it was starting to bother me. I don't own a Thin Blue Line flag- and even if I did, I don't have a deck at the moment thanks to a Flaky Contractor and a long protracted saga which is almost its own post at this point- so I have no place to fly flags right now- which kind of bums me out a bit. But let's say I did- would I fly a Thin Blue Line Flag?*

Yes, I would, and for a very simple reason: according to Blue Help, which is an advocacy group working to reduce the stigma of mental health and advocating for services and benefits for law enforcement since 2016, 882 officers have committed suicide. In 2019, the number was 236 which exceeded line of duty deaths that year and it doesn't include at least 100 deaths of law enforcement officers due to COVID.

It's a tall task, but take the events of this year and put them on a shelf for a second. Hell, even take the history of the term 'thin blue line' and set it to one side for a second. When you get down to the nitty-gritty of things, law enforcement is broken in many ways. You take recruits, you pound into them that their job is dangerous and they need to be hyper-aware of very real things and then you send them out onto the streets to constantly see people at the worst moments of their lives day after day after day. Your agency is never staffed properly. Your mileage may vary depending on agency** but overtime is ever-present. This is a job that eats relationships and impacts your family. You're going to miss the holidays. You're going to miss birthdays. And in the ten years I've been in the business, the attitude of "well, that's the job, so deal with it" seems to have shifted a bit, but not nearly fast enough. In short, the way it really works on the ground is kind of crazy in many ways and no less an authority than Jocko Willink said as much during an interview with Joe Rogan over the summer.

Do I like the commodification of law enforcement? No. The whole Punisher thing is absolutely cringe and the Dispatch side of things isn't that much better in that regard. (No, I don't want anything with the words 'Bunker Bitch' written on it. I don't care how much you want to 'own the libs.') And for all the original intent of the Thin Blue Line Flag being for solidarity for police and law enforcement, their website sure does sell a lot of shit.

Do I like the politicization of law enforcement? The very valid critique of this flag is that it does reinforce an 'us versus them' mentality on both sides of the very real and necessary debates about policing in this country. It's also telling that if supporters of one political party are going to fly your flag and the others are more likely to burn it- or at the very least, wouldn't be caught dead with it in public, then that's a problem. Law Enforcement at the end of the day has to be as apolitical as possible. That means you can't be endorsing one candidate over another because when the dust clears and the election is over you don't have to serve some of your community, you have to serve all of your community.

To be fair to law enforcement, the politicization isn't entirely on them. It seems that everything needs to be politicized these days whether you want it to be or not- but, you know, it'd be nice to see some resistance to it.

Do I think people who fly this flag are racist? In general, no. But despite the company insisting that the flag wasn't meant to be political, it's being used politically and that means that whether you like it or not, context matters. You can't apply that to every flag, though. (Confederate Battle Flags don't usually require a lot of context, in my experience.) But I think for right now you can apply it to this one. Context matters. Why you fly this flag and when you fly this flag matters.

So, what about the big, unspoken topic in the room? I've made it a personal goal to actually read on some of these topics myself instead of reading what other people think about them on the internet- but so far, I've read one book that directly critiques policing in America today. I think it misses on one big point: police and by extension policing reflect the priorities of the political establishment in any given decade. And when I say 'political establishment' I'm including both parties in that definition. In the past, some of those priorities were inherently racist. But change those priorities and you can change the nature of policing in this country and, depending on what you do, you can advance the concept of 'equal justice before the law' a little closer to reality- but changing those priorities is why marijuana legalization was so successful this year at the ballot box and demands to 'Defund The Police' were decidedly not.

But first, of course, I gotta get a new deck.

**I feel like this problem is more common in Dispatch. Poorly run communications center can absolutely chew people up and spit them back out again. It's why burnout is so common in dispatch and far more overlooked.