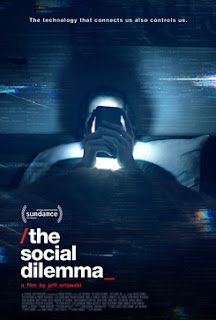 Election season means that we're treated to a lot of talk about 'election interference' and that means that the streaming services of your choice have dropped a relevant documentary or two and sure enough, Netflix has two ready to go that deal with more or less similar topics, so I decided to watch them both.

One of the weird things about 2020 is that so many things have happened the year that other things that were a big deal at the time either fade from your memory entirely or just get lost in the distant memories of that time before this decades long year. The Cambridge Analytica scandal was kicking around a little bit since 2015-- when The Guardian noted that they were harvesting data from millions- yes millions of Facebook accounts without their consent to build big data analytics for Ted Cruz's campaign for President in 2016. It should therefore be no surprise to anyone that they switched teams in short order, helped the Trump Campaign and then went on to work on the Brexit campaign as well.

The documentary opens with a Professor, David Carroll taking notice of the CEO of Cambridge Analytica claiming to have 5,000 data points on ever American voter during a Channel Four expose-- being a British company, Carroll decides to take a run at acquiring his own personal data, because he wants to find out just what all Cambridge Analytica has on him. I don't think he ultimately gets anywhere, but he certainly tries- and that leads us to former Cambridge Analytica exec/developer Brittany Keiser- who, unlike her counterpart Christopher Wylie, I had never heard of.

Keiser paints a pretty grim picture about how easy it was for CA to scrap data off of everyone's Facebook profiles and then drill down to Congressional districts and even precincts to identify which voters might be "persuadable." Then, the next apparent step was to figure out what motivated those people and then, through the use of words like 'psyops' and 'psychographics' the filmmakers spin a tale of how the election was 'hacked' and people were 'manipulated' into voting for Donald Trump.

(It's worth noting at this point that the ICO's final report in Cambridge Analytica was just released a day or so before I sat down and watched The Great Hack and it found that a lot of the stuff they talked about was slightly overblown-- but it's also a government organization releasing this report, so sprinkle salt as needed.)

The Great Hack makes a compelling case for data rights. Your personal data should belong to you and you should be able to control it. It also makes a pretty good case for higher levels of government regulation for these companies-- but what about the election stuff? Meh. I can't speak to the veracity of the Trinidad and Tobago election they talked about- but Bolsonaro's rise in Brazil was preceded by a massive corruption scandal. I mean, massive. The Great Hack conveniently ignores a lot of things like a growing sense of outrage at wealth inequality and corrupt political classes in countries like Brazil or say, the United States. And while I'm inclined to think that Hillary Clinton was subjected to a lot of unfair sexist bullshit, the fact of the matter is that she didn't go to Wisconsin or Michigan after the convention and lost both states by the skin of her teeth as a result. One bad campaign decision cost her the Presidency-- maybe Facebook had something to do with it, I don't know-- but I'm sure a week of campaigning in both states might have swung them her way as well. There's no way to 100 percent certain.

In contrast, The Social Dilemma focuses more social media as a whole, going through what we know already: it's kind of bad for us. Former executives and tech types talk about the usual song and dance that we've already been told about a million times: it's probably responsible for rising rates of depression and anxiety in teens- especially girls. It's stunting our ability to have human interactions on any meaningful level- and in a nicely dramatized moment, it illustrates the potential for radicalization by having a member of this prototypical 21st Century American family go down the social media rabbit hole and get arrested at a rally for something called the EC, or the Extreme Center, which is both hilarious and sad- as the subtext is that "using Facebook too much could get you arrested at an extremist political rally."

(Though one has to wonder what a bunch of Extreme Centrists would be shouting about: "What do we want?" "Moderate pragmatism!" "When do we want it?" "NOW!" "We're willing to use any means necessary to achieve our ends of moderate, pragmatic government that appeals to a broad base of voters and extends societal benefits to those that need them while respecting the rights of the individual in a classically liberal sense!")

If there's anything interesting about The Social Dilemma, it's probably the amount of tech execs expressing concern and regret about the damaging effects of social media without actually acknowledging their role in creating the problem- though to be fair to them, a lot of are now interested in things like healthy internet use and design ethics, which is nice, I suppose- but it feels like a bunch of Phillip Morris executives leaving the Tobacco Industry to join the American Cancer Society. Nice, but you can't really ignore the fact that you helped create this mess.

Assuming these companies don't get broken up or regulated into the sun, it's a fair bet to think that social media will be the tobacco of the next generation. We'll have like this weird, cultural backlash to it eventually with lawsuits and all the whole nine yards. I can see social media coming with some kind of a health warning at some point in the future as well.

As for the dramatic bits featuring the 21st Century American family? Eh. They were a bit... overdone and cheesy, but honestly, one of them tuperware containers with a timer doesn't seem like the worst idea in the world to get. Force accountability on yourself, while exchanging quick hits of dopamine for being meaningfully present in your own life and the lives of your loved ones. I'm seriously considering getting one.

Overall: both documentaries are worth watching, but The Social Dilemma doesn't really tell you anything you don't already know. (It's addictive, designed to piss you off and generally bad for your mental health.) I have to give the nod to The Great Hack here, which really gets into the nitty gritty of data scraping and data mining which proves beyond a doubt that we are the commodity the social media companies leech off- with no profit going back to the owners of the data they scrape. (Namely, us.) I'm not quite convinced they made their case on election influencing-- there are other external factors to consider outside of Cambridge Analytica's shenanigans-- but they do make a compelling case for data rights and data ownership for individuals. My Grades: The Great Hack, **** out of **** & The Social Dilemma, *** out of ****