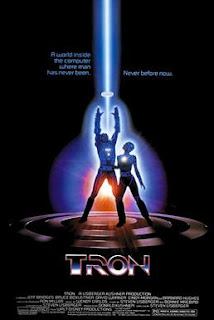 Watched On: Disney+
Released: 1982
Directed By: Steven Lisberger
Starring: Jeff Bridges, Bruce Boxleitner, David Warner, Cindy Morgan, Bernard Hughes, Peter Jurasik
Rotten Tomatoes: 74% Tomatometer, 69% Audience Score
Pick: Mine
So, when I heard that a sequel to TRON was coming out a few years back and that Daft Punk was going to be scoring it, it was the latter fact that got me excited enough to go and see it in the theaters. (And for sure, TRON: Legacy's score remains one of the greatest soundtracks of the past twenty years.) But, it struck me the other day that I hadn't actually watched the first one and, thanks to the magic of Disney+ there was really no reason why I couldn't go back and check it out to see what the fuss was about. So I did!
Kevin Flynn (Jeff Bridges) is a leading software engineer formerly employed by ENCOM who now runs a video arcade while he attempts to hack into the companies mainframe- where ENCOM's Master Control Program (MCP) keeps frustrating his progress. Back at ENCOM, programmer Alan Bradley (Bruce Boxleitner) and his girlfriend, Lora Baines (Cindy Morgan) find that they've lost access to their projects thanks to the MCP and when they confront the senior Vice President Ed Dillinger (David Warner) about it, he says it's an attempt to stop outside hackers.  When Dillinger confronts the MCP, however, he realizes that it's outgrown it's original programming and is power hungry, appropriating business, personal and government programs to increase it's own capabilities.
Lora and Alan figure out that the hacker is their old buddy Flynn and go down to the arcade to warn him. He reveals that he's been trying to find evidence that Dillinger stole his work and that ENCOM's hit video games are, in fact, his-- and Dillinger's theft helped him get ahead in ENCOM. The three hatch a plan to break into ENCOM and activate's Alan's TRON program, a self-governing security measure which protects the system and counters the functions of the MCP while Flynn hacks into the MCP to get proof of Dillinger's acts- but comes into direct contact with the MCP who uses an experimental laser to digitally download Flynn into the mainframe.
Once inside, Flynn finds a world inside the mainframe, where programs resemble their creators (or users) and the MCP (voiced by David Warner) and it's second in command, Sark (David Warner) rule and coerce programs into renouncing their believe in the users- forcing them to compete in deadly games. At once, Flynn is thrown into those games and meets Ram (Dan Shor) and Crom (Peter Jurasik). Together they break out of the arena and into the mainframe during a lightcycle match
Flynn learns that he can manipulate portions of the mainframe by accessing his programmer knowledge- but it's not enough to save Ram-- but it does help him disguise himself as one of Sark's soldiers to hide on the MCP's command ship. Meanwhile, Tron and Yori, another sympathetic program go to an I/O tower to get information from Alan to destroy the MCP-- they meet back up with Flynn and together they break through the MCP's shield and snap his control over the mainframe.
This throws Flynn back into the realworld, rematerialized at his terminal and Tron's victory relreases all lockouts and provides Flynn with proof of Dillingers plagiarism. Flynn is brought back and promoted to ENCOM CEO and happily greeted by Alan and Lora as their new boss.
Groundbreaking for it's use of computer animation, TRON is surprisingly prescient when it comes to the arc of technological potential-- considering the fact it was made in 1982, one year before I was born it's actually really amazing in many ways- and is thinking about the potential drawbacks to things like aritificial intelligence way before you would expect people to be having these conversations.
The animation is dated- but considering the fact it was the first movie to integrate it, it looks really damn good, so that didn't even bother me all that much. The plot got a little confusing now and again, but held my attention and was decent enough-- but it also makes TRON: Legacy look really, really good as a sequel, because they paid a lot of attention to continuity from the first film- like impressively so.
Overall: If you loved TRON: Legacy, it's worth going back and watching the first one. Holds up really, really well- even if seeing a video arcade seems like a nostalgic blast from the past that kids today will never really know the joy of. My Grade: **** out of *****