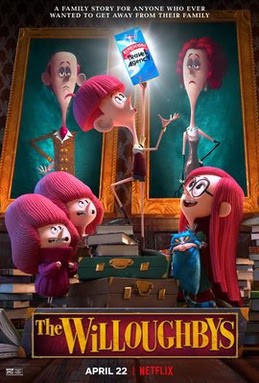 Look, I'm just going to come right out and say it: if you're an adult, you're going to give The Willoughbys a lot of side-eye. You will say things like, "Well, that's fucked up." and "Damn, this is dark." But your kids will probably find it charming and kind of sweet- and once you get through the dark fucked up parts, there's a happy ending waiting on the other side.

A stray cat (Ricky Gervais) narrates the story of the Willoughby family. They had been great for generations: loving and adventurous and then the current Patriarch (Martin Short) and Matriarch (Jane Krakowski) of the Willoughby Family came along. Narcissistic and self-centered, they have children: Tim (Will Forte), Jane (Alessia Cara) and The Barnabys (Sean Cullen) whom they promptly ignore and outright neglect. The kids are more or less forced to fend for themselves with Tim doing his best to take care of his siblings.(Jane loves to sing- but her voice is silenced by her parents. The Barnabys are inventive, but the parents think they're 'creepy'.)

In short, some straight up child abuse is going on.

When Jane finds a baby left outside their house and brings it in to take care of it- the kids are all banished from the house by the parents and told they can't return until they get rid of the baby.

The kids eventually leave the baby, whom they name Ruth on the doorstep of a candy factory and the owner, Commander Melanoff (Terry Crews) takes her in.

Then the kids hatch a plan to get rid of their neglectful parents altogether by sending them on a 'murderous vacation' by fabricating a travel brochure ("The Reprehensible Travel Company") full of volcanoes, bears and other hazards. (Dark, for a kids movie.) But the parents hire a Nanny (Maya Rudolph) to watch the kids while they're gone. Nanny wins over everyone but Tim upon her arrival- and learning about Ruth, she takes the kids to the candy factory to 'rescue' Ruth, but realizes that Commander Melanoff  actually cares for the Ruth and she's safe with him.

Meanwhile, the parents are running out of money to fund their adventures and decide to sell their house online-- Tim overhears them telling Nanny that in a voicemail and believes that it's proof that she's in league with the parents and he reports her as a 'bad nanny' to the sinister Orphan Services.

The parents' realtor organizes an open house and the kids- with Nanny's help, scare off potential buyers, but Oprhan Services arrives. (I get that Child Services is not everyone's idea of 'fun happy people' and from a kid's point of view, the way they're portrayed her may well be accurate, given the trauma some kids go through being removed from their homes, but still: super fucked up.) The head agent recognizes Linda as a former orphan and she leaves, upset at Tim's betrayal and the kids are split up and sent to different foster homes. Tim keeps running away from his foster parents and eventually discovering the Willoughby House has been demolished gets confined in the Orphan Services Center (essentially, juvy. Fucked up.)

Linda breaks him out and they get other siblings back and together with Commander Melanoff and Linda make plans to go find the parents in Switzerland, where they're climbing 'the Unclimbable Alp' so "they don't have to be orphans aanymore." (Suuuuuuuuuuuuuuper fucked up that the kids appear to be all ready to go back to their abusers. At this point, I'm thinking: there's no possible way they're gonna do this, are they?)

Turns out, they don't. The Parents continue to not give a damn and leave the kids to freeze to death on the mountain. (Another moment where you wonder: there's no possible way they're going to do this, are they?) Linda, the Commander and Ruth rescue them and Linda and the Commander adopt all the kids and they become a happy family together at the end of the movie. Oh and the parents get eaten. By a shark.

Overall: Sweet, charming, dark and outright fucked up in parts, The Willoughbys will mildly disturb adults, but entertain your kids. So take that for what you will: My Grade: ** 1/2 out of ****