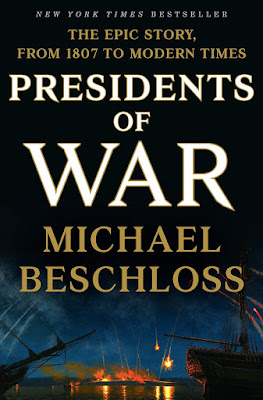 This is sneakily an incredibly timely book and I haven't really checked to see if it's getting some of the credit it's due, but I hope it is, because it's an incredibly timely book. Historian Michael Beschloss tell the story of the Presidents who have lead the nation into a major conflict, starting with Madison and the War of 1812 and then going through Polk and the Mexican War, Lincoln and the Civil War, McKinley and the Spanish-American War, Wilson and World War One, FDR and World War Two, Truman and Korea and finally LBJ and Vietnam.

For each President, Beschloss describes the circumstances of their 'war' and how the nation found themselves in that war. How the President declared war (or not) and then the effects- both political and personal- on each President as the war unfolded. In doing so, he helps to demonstrate just how far the ability to make war has evolved from the structure originally envisioned when the Constitution was written at the foundation of the Republic. This evolution is- or should be, profoundly troubling to any American who reads this book and, honestly, if it prods a member of Congress or two to maybe start asking some hard questions about the President's ability to make war and whether or not it has gotten too broad and too uchekced that could be nothing but a good thing, I think.

The history of some of these wars were fairly unknown to me-- I knew that the War of 1812 happened, but I didn't really have a good grasp of why we got into the War of 1812 to begin with. The story of Madison being forced to flee and confronting a nation who blamed him for the British invasion and burning of Washington D.C. was a fascinating one that I had known nothing about. I mean, I guess I figured that Madison would be somewhere, but I figured it'd be like Philadelphia or something and not, you know, a barn.

Polk and the Mexican War I was a little more familiar with, but I didn't realize how far Polk pushed the envelope in grabbing as much territory as he had-  it was not at all what Congress had originally anticipated and it's kind of funny how the delays in communications helped Polk 'fudge' things a bit and get the result he wanted.

Lincoln and the Civil War I knew plenty about, but McKinely and the Spanish American War also proved to be somewhat illuminating. I didn't realize that McKinley's wife was so fragile (I guess she suffered from epilepsy and that was considered a sign of insanity back then?) and while I knew the basic story of the Spanish American War ('remember the Maine, to hell with Spain' etc) I didn't realize the level of uncertainty around the cassus belli of the war-- they got into it and had a pretty good feeling that it wasn't Spain that did anything to the Maine, but rather a boiler that blew up, but they were all in and couldn't really back out at that point.

WWI and WWII prove interesting mainly for the health impact they had on both Wilson and FDR respectively-- Wilson's refusal to deal Congress in on the peace delegation to Versailles was probably fatal to his ambition for the United States to enter into the League of Nations. The thing that amazed me about Vietnam was that LBJ seemed to trip and fall into the war and then immediately knew it was a bad idea and couldn't find a way out- literally, like the General in his Labyrinth.

(Also, Jim Morrison's Dad was the Commander at the Gulf of Tonkin Incident and Nixon campaigned for the Midterms in '66 in the same jet that Pussy Galore flew around on in Goldfinger- two totally unrelated nuggets of knwoledge that amused me greatly.)

Overall: An incredibly detailed portrait of the Presidents who have lead the nation into wars, it's also a timely exploration of the evolution of the war powers of the President and how they've been wielded over the years. Beschloss is an accessible writer and knows his subject matter- so this is an eminently readable tome as well. My Grade: *** out of ****