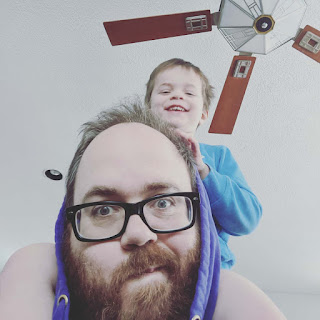 It's May, so that means it's Apraxia Awareness Month! Expect my social media to be full of Apraxia related posts and quotes and all that jazz, but for now, I wanted to take a break from my recent mixture of reviews and virus related things to talk about Medium Spawn and our experience with Apraxia.

I think the most important thing people should know about Apraxia is that there's no easy fixes: this is a marathon and not a sprint and from what I can tell, every kid experiences this a little bit differently and there are a million different ways to approach this, but they're gonna involve speech therapy. Lots of speech therapy- and you know what? Speech therapy works! Medium Spawn has so many words now it's not even true and I feel like he's getting more and more with every passing week. We have fewer communications barriers and much less frustration on his part and in general, I feel like he's a lot happier and a lot more active than he used to be.

We started preschool last fall and we had a wee bit of an adjustment period, followed by a strange period when were very anti-coat- but we got through that as well! Honestly, I was a little concerned about how he was going to handle the whole 'pandemic turning everyone's routines upside down' thing- but really, I think he's adjusting better than Eldest Spawn in many ways. He's still doing speech therapy: but we've moved to Zoom which is something of a challenge the more we do. It's not that he doesn't pay attention and engage, because he does- it's just that he's figured out that he can move around, get bored and go do other stuff-- which means, I get to chase him around with my phone in tow and we do 'speech therapy on the move'- which on Thursday ended up with, him and Small Spawn on the stairs leading down to the basement. Not exactly the speech therapy I was expecting, but in these times, you've got to roll with the punches and rise to the challenges, I guess.

This is a marathon not a sprint, but we're getting there.

I think every parents has a picture in their head about what they'd like their kids to be- whether they admit or not- but what you find out when you actually have kids is that whatever image you have in your head doesn't matter a bit. They are who they are and who they are is awesome- even on the not so awesome days.

Medium Spawn is a sweet, hilarious kid and someday he's going to give speeches. Watching him finding his voice continues to be one of the great joys and privileges of my life.

And if you're a parent of a kid with Apraxia- especially if you've just found about it and are trying to figure out what Apraxia is: don't worry. It's overwhelming as hell and it feels like one hell of a mountain to climb, but you'll get to where we are. And we'll all get further up the mountain to where those people up there are. Climbing this mountain though? It's worth it.