May 26, 2020
So, it's been awhile since I did an edition of Boozehound, so I figured I might as well share some of the things I've been up to in the old home bar. And let's just say the blender has been getting something of a workout: 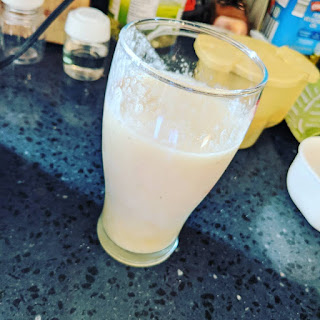 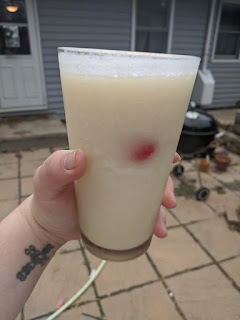 I know 'traditional' bartending doesn't really focus on 'frozen' drinks- but the Missus is a huge fan of pina coladas and we scored an entire case of bananas from a school lunch pick up- so we had a couple of weeks where frozen banana daiquris (top photo) suddenly became my drink of choice. The recipe I found over on the Spruce Eats included both Triple Sec and lime juice, which struck me as kind of unusual as the classic daiquiri consists of simple syrup, lime juice and rum- so I'm not sure what Triple Sec brings to the party- but it made for a tasty drink, so I didn't care all that much. If there was a downside to the Banana Daiquiri is was probably that the banana flavor got buried a little bit- which makes me wonder if swapping out Triple Sec for something like 99 Bananas would up the flavor a little bit more. (But I also don't love 99 Bananas or Banana Daiquiris enough to test this theory out. At least not right now.)
Pina coladas (bottom photo) are classic drinks and necessitate a blender to be really good, I think. Ice, pineapple, pineapple juice, some cream of coconut and a healthy dollop of coconut rum and dark rum and you've got what the Missus assures me is a damn good pina colada. If there's a tasty concoction I can see myself breaking out the blender for on the regular, it would probably be these.
Moving away from the blender, I also had some fun with regular old cocktails as well: 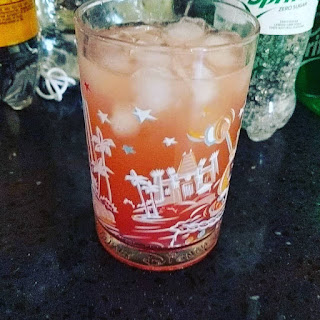 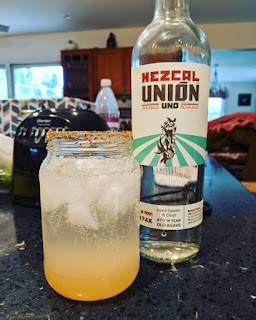 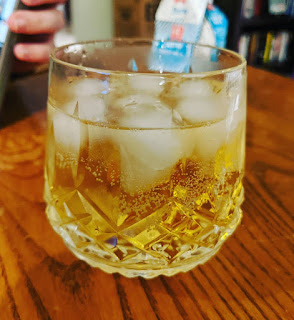 Top one was something special I whipped up for the Missus- it looks like a Shirley Temple, but is, in fact, a Shirley Temple Black. I don't have a specific link to a recipe- but the one I did find made me curious, because I would swear I put vodka and not rum in the one I made, but who knows. The Missus liked it though- and a satisfied 'customer' is what I am for.
Middle picture was probably the best cocktail I've mixed so far. I've got that bottle of Mezcal kicking around, so after some digging and interneting I found a recipe for a Mezcal Paloma and decided to give it a whirl to see what it was like and hoo boy: this one, I'm going to keep bookmarked. I'd call fresh fruit juices a must for this-- lime and grapefruit + mezcal and simple syrup create an unusual but not unpleasant combination. The mezcal lends a smokiness that balances out the sweetness almost perfect and creates something that comes very close to tart? (But tart isn't quite the right word either...  think of lemonade. If you want a drink that's going to have the crisp, refreshing texture/mouthfeel of lemonade without the overwhelming sweetness, that's about where the Paloma is.)
Bottom picture is a classic. It's kind of surprising, given how much I enjoy whiskey that I've never sat down and made myself a proper scotch highball, so I finally did after watching a pretty decent video about them. This was Churchill's drink of choice to start his day (along with shitloads of other booze- but that's a different story, as I don't think anyone could match Churchill drink for drink and make it to lunch. And I've read articles where reporters have tried and very much failed.) On the plus side: it's refreshing and crsip and not as heavy as drinking it neat or even on the rocks. I dig it.
(Also made, but not pictured: homemade Amaretto sour and an Old Fashioned. Both were delicious in the extreme- oh and vodka tonics have entered our cocktail rotation, partially because we don't have gin and partially because of quinine- tho, I do know you'd have to drink gallons of tonic water to get any therapeutic benefit from the quinine- assuming the ballyhoo about hydroxychloroquine is legit, which it doesn't seem like it is.)
So that's what I've been up to in ye old home bar in these days of quarantine! Hope everyone is staying thirsty!)